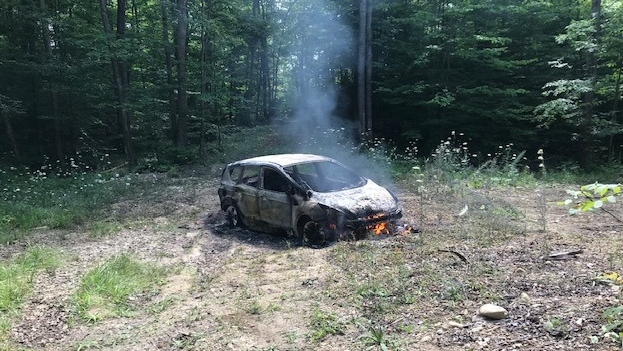 A stolen vehicle later found on fire in West Grey, Ont. on Tuesday, Aug. 13, 2019 is seen in this image from West Grey police.

West Grey police are investigating after a vehicle was found ablaze in a field just hours after it was reported stolen.

Police were contacted shortly after 5:30 a.m. on Tuesday about a Ford Escape that had reportedly been stolen overnight from a home on Concession 2 WGR.

Then around 1 p.m., police say they received a report of a vehicle on fire in a field on the south side of Concession 6 east of Sideroad 40 in Glenelg, Ont.

The Grey Highlands Fire Department put out the fire, but the vehicle had been completely consumed by the flames.

Police have confirmed it was the vehicle reported stolen and believe it was driven through a number a trails in the surrounding wooded area before the fire.

Anyone with information is asked to call the West Grey Police Service at 519-371-6911 or Crime Stoppers.