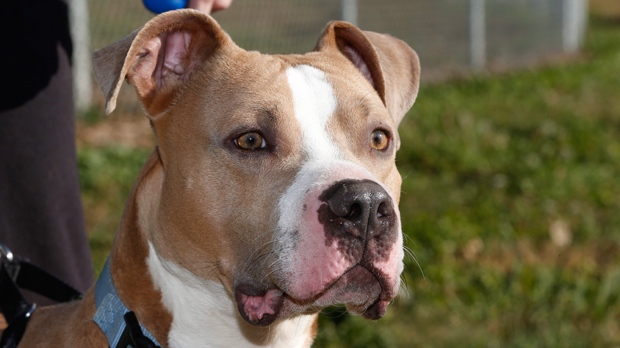 In this Tuesday, Oct. 14, 2014 photo, a 2-year-old pit bull named Buddy waits to play at a dog park in the south Denver suburb of Englewood, Colo. (AP Photo/David Zalubowski)

Rick Nicholls introduced a private member's bill in the legislature Tuesday that would alter controversial provisions in the Dog Owners' Liability Act that prohibit the breed.

Nicholls, who represents the riding of Chatham-Kent--Leamington, said he has long pushed various governments to repeal the "breed-specific legislation" introduced more than a decade ago.

"It's not pit bulls, it's dogs, it's the owners and how the dogs are treated," Nicholls said in an interview Tuesday.

"If you beat a dog or you train a dog to be vicious, that dog will be vicious regardless of the breed itself."

Pit bulls and killer whales are the only animals banned across the province. Ontario prohibited pit bull ownership in 2005, angering many dog lovers who argued the law wrongly punished pets instead of their owners.

The law grandfathered in pit bulls already in the province, but made it mandatory for those animals to be spayed or neutered.

It also required pit bulls be muzzled and leashed in public -- all provisions that would be repealed should Nicholls' proposed bill pass.

Nicholls admits the governing Tories are split on the issue.

"Some are supportive of it and others are not as supportive," Nicholls said. "That's OK, it's a free vote and they can vote any way."

It is unclear if the ban ever had an effect on reducing dog bites and attacks, let alone those from pit bulls. The Canadian Press reported in 2016 that Ontario does not collect data at the provincial level and does not regulate how, or even whether, municipalities collect and store that data.

Some municipalities do track dog bite data, but it can be collected by the local public health unit or the animal control unit, depending on how it's reported.

The Liberal government originally banned the dogs in response to a vicious attack by two pit bulls against a Toronto man.

The goal was to eradicate pit bulls from Ontario over time, but it didn't work.

In 2015, the Ontario Society for the Prevention of Cruelty to Animals and the Chatham-Kent police force raided a compound in Tilbury, Ont., and seized 31 dogs -- all pit bulls. Five people faced hundreds of charges, including criminal charges for weapons and animal cruelty offences, along with provincial charges for owning pit bulls.

All 31 dogs were found attached to chains that were tied to metal stakes in the ground. The dogs, an inspector noted, had severe scarring "consistent with dogfighting."

Three of those dogs were immediately euthanized for medical reasons and the remaining 28 underwent a behavioural evaluation by the American SPCA, which said 21 of them were deemed a menace to society and could not be rehabilitated.

The OSPCA, however, had to apply to court to have the 21 dogs destroyed for behavioural reasons, which led to a public outcry.

Activists, Hollywood celebrities and hockey analyst Don Cherry campaigned to save the dogs on death row.

The OSPCA eventually relented and 18 dogs were sent to Florida for rehabilitation.

The bill is set for debate in the legislature on Thursday.