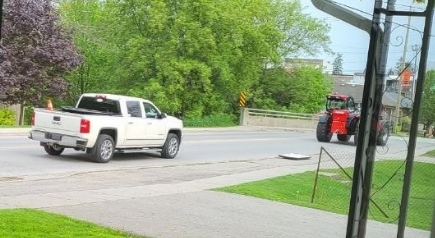 Two suspect vehicles, a white pick-up truck and a red tractor, are seen in recent surveillance footage. Police say three suspects driving these vehicles are suspected in a case of theft and mischief where multiple pride flags were defaced and stolen in Norwich Township on May 20 and 21. (Source: Oxford County OPP)

On May 20 at approximately 5:15 a.m., Oxford County OPP received reports of theft and mischief on Stove Street in Norwich Township, Ont.

On May 21 at approximately 7:30 a.m., police received another report that the pride flag that was damaged the day before had been stolen. A third pride flag on a different hydro pole on Main Street was also stolen.

After reviewing video surveillance, police believe that a white GMC Sierra pick-up truck, a red tractor and three male suspects dressed in orange safety gear to be involved in the vandalism.

Parts of a mountain glacier collapsed in the Italian Alps on Sunday amid record temperatures, local authorities said, killing at least six people and injuring eight.