LONDON, ONT -- After backlash from the Ontario public, Premier Doug Ford has loosened his stance on one outdoor restriction.

Less than 24 hours after his Friday news conference Ford tweeted this afternoon that playgrounds will be opened. 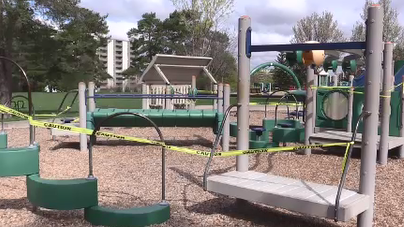 "Our regulations will be amended to allow playgrounds but gatherings outside will still be enforced. Play outside safely. Parents keep your distance & wear masks if you can’t."

However despite one change, the others will remain.

Signs reading 'Beach Closed' went up on the main beach in Port Stanley Ont., and barricades were placed across the municipal parking lots Saturday morning.

It set off a storm on social media with residents angry they weren't allowed to walk across the sand.

"We're encouraging people to stay home but people for exercise are allowed to walk across the beach and across our parks," says Marks.

"They are not allowed to congregate, that's the difference. We realize fresh air is good for us so the bylaw officers are trying to educate and I emphasize, educate and we're not trying to aggravate"

Marks says they made the decision to close the beach prior to getting the regulations from the province just before noon Saturday.

"We put some yellow tape around the playgrounds and I heard that that's been torn down so the next steps is snow fence and stuff. We're scrambling but our goal is just keep people safe."

A few kilometres North in St. Thomas Ont., Albert Visser showed up at Pinafore Park to play his regular Saturday morning tennis match. He was shocked to see the gates locked. 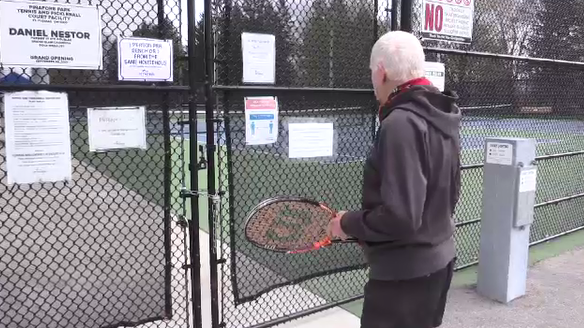 "I heard about some changes but I never really expected them to close down that the courts," says Visser, 77, who plays tennis and pickleball.

"So far that I don't know of anybody in our group here and that's about 40-50 people that have gotten COVID from anybody. So I think this is a fairly safe sport, and it's healthy, you know people are going to sit on the couch and not be healthy at all. I think it's a bit of an overkill".

Golf courses across the province are shut down for the next month despite heavy lobbying from those in the industry.

"We now know (as we believed a year ago), that golf is an activity which promotes physical and mental relief, and is uniquely designed with social distancing built into it - making it a safe activity for people to escape the stress of the pandemic for a few hours of respite," says Doug Breen, regional vice-present of Golf North Properties.

"A year ago, we believed it was true, but 12 months and 20 million rounds in Ontario without a single known case of transmission, proves it to be true. Ontario looked at the same evidence as every other province and state in North America - and only Ontario has concluded that golf ought to be shut down. Rather, most jurisdictions are encouraging people to get outside into the sunshine and fresh air".

"This wasn't what was asked for," says Barrett.

"Measures to reduce the spread of COVID-19 used to be evidence based, science based and right now the majority, the vast majority of new infections are occurring indoors, not outdoors. So I'm not sure where the evidence was to shut down, outdoor recreational facilities."

"Outdoor activities are vital for mental and physical health, especially with stay-at-home orders. Science is clear: Outdoor COVID transmission is extremely rare. If you can't separate by 2 meters, put on a mask, Simple."