OPP and Hydro One are reporting numerous power outages in Lucan-Biddulph and Middlesex Centre as well as in Grey and Bruce Counties after powerful winds overnight.

As of early Friday morning, Hydro One had reports of about 100,000 people without power in Ontario.

Len McMillan, vice president of operations and maintenance for Hydro One Networks, said in a statement "This violent sind storm has caused widespread damage across Ontario. Our lines and forestry crews are out in full force and we appreciate our customers' patience."

Provincial police are asking motorists to be extra careful as some traffic lights are out and falling trees have brought down hydro lines in many areas.

However, there have been no reported injuries as a result of the fallen trees and hydro wires.

Hydro One says some of the hardest hit locations in southwestern Ontario include the Clinton, Lambton, Listowel and Strathroy areas.

In central and eastern Ontario it could be as late as Sunday before crews can restore power.

A map of ongoing outages and the estimated time of restoration can be found on the Hydro One website at: http://www.hydroone.com/stormcenter3/ 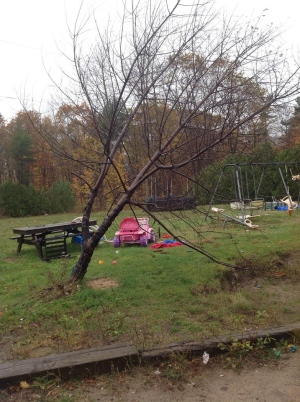