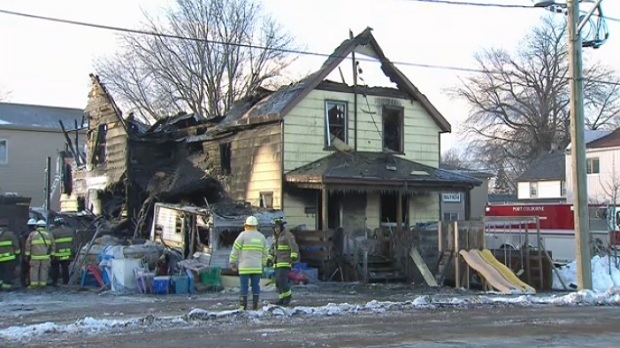 Firefighters on the scene of a fatal house fire in Port Colborne on Dec. 14, 2016.

Thirty-seven-year-old Tammy Burd, her children, 15-year-old old Samantha Zuvic and two-year-old Joshua Zuvic, and her grandmother Eva Burd, died after a fire broke out in their home.

The blaze broke out early last Wednesday, with the family's two-storey home fully engulfed in flames by the time firefighters arrived.

Eighty-three-year-old Eva Burd was pulled from the residence but died.

Police say the bodies of Tammy Burd and her son were found last Friday in an upstairs bedroom, side by side. Burd's daughter's body was recovered on Sunday from the main floor of the home.

Burd's husband and an uncle, who also lived in the home, managed to escape the flames.

Vigil prayers are being held for Burd and her children in Port Colborne today, with a burial mass set for Friday.

A funeral for Burd's grandmother was held on Monday.

Police say the investigation into the cause of the fire continues.