Erosion along Lake Erie near Port Burwell has led to a canyon like opening stretching from the lake.

In aerial photos that storm chaser David Piano has shared to Twitter it is easy to see the change over the years.

The most current photos captured by Piano show a large gaping hole reaching out from Lake Erie into farmland near Port Burwell Ont.

In 2013 the canyon was nonexistent, now it is stretching far inland encroaching near roads and farms.

The exact location of the canyon is not being reported as the area is potentially dangerous, and the public is urged to stay away.

Erosion is not new along the Lake Erie shoreline, however in recent years it has forced the closure of roads and threatened properties.

Record high lake levels and intense wind storms in recent years has not helped the situation.

You can see more photos of the ‘canyon’ below along with a video that David Piano produced:

As word spreads of the spectacle, neighbour Kerrie Kipp worries people will take unnecessary risks to get a close-up look.
“I just hope people stay away because it can be dangerous. Like you can literally drive in and make your way down, and I know it’s a well known, I’m gonna call it partying spot for some of the younger generation. Probably just a matter of time before someone, you know, does something silly.”
According to the Long Point Region Conservation Authority some areas along the Lake Erie shoreline in Norfolk and Bayham see an average of four to five meters of erosion per year. Watershed manager Ben Hodi suggests that any attempts to shore up the area are futile.
“Protecting from erosion with those very high erosion rates is very very expensive and doesn’t last for very long. Mostly because your erosion protection structure gets outflanked on neighbouring sides.”
As recently as 2013, the canyon didn’t even exist, but record high lake levels and intense wind storms over the years have hastened the erosion. But Hodi says the holes aren’t just caused by lake erosion, but also ground water and surface water.
“As it progresses every year the lake kind of cuts down at the lake bed, which causes erosion at the shoreline, and when that happens you get roughly uniform erosion along the shoreline. But these gullies forming like that, that’s more of a ground. water and surface water issues causing that.”
As for Kerrie Kipp, she’s just hoping common sense prevails.
“I hope people are aware enough that it’s dangerous. The road is closed for a reason.”
RELATED IMAGES
view larger image 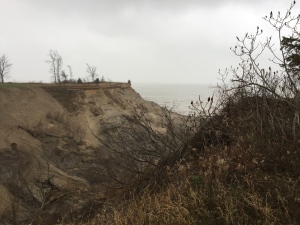