Management at United Supermarket on Adelaide Street North, which has been in operation for 11 years, tell CTV News that business is down by nearly 50 per cent, and they’ve had to reduce staff hours by about one third.

Hustle and bustle has been replaced by quiet in the aisles says manger Fa Zhang.

“Usually during lunchtime like around afternoons our store is busy. We have like four cashiers going and right now we don't even need two cashiers. We don't have customers in the back door. We don't have customers in the front door. And our hot food section - usually people love our Chinese food. They come in and buy it. We have a big lineup for Chinese food but right now it's totally empty.”

Store owner Joanna Jiang said she understands people would want to protect themselves, but business is taking a hit because of their reluctance to shop there.

“Everyone should protect themselves right? So, I don't think there's anything wrong. It's being human, normal thinking right? But for our business, they decreased a lot.” 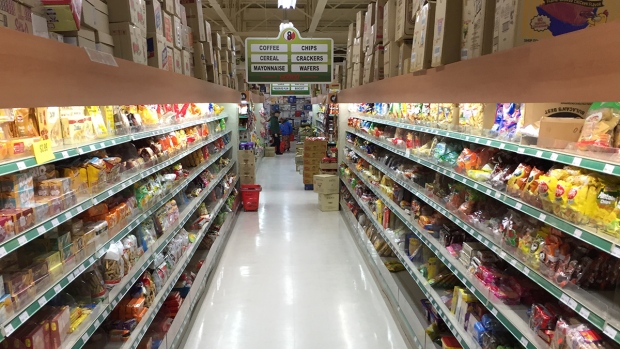 The slowdown comes as the Middlesex-London Health Unit continues to advise residents that the risk for contracting the illness remains low.

London had one case of the seven positive cases for coronavirus in Canada, but that person’s condition been resolved, say health officials.

Further, anyone who has returned from Hubei province in China is being closely monitored, and those who have returned from mainland China in the last two weeks are asked to self-monitor and report any symptoms immediately.

“These precautions ensure that our community, including places where lots of people gather are safe," says Associate Medical Officer of Health Dr. Alex Summers.

“It's important for people to recognize that this is not an appropriate way to discriminate against a group of people. We have the appropriate protections in place. Worsening stigma in response to an outbreak is not a solution to that outbreak.”

In the meantime, the store says it's done all it can to maintain safety, even going so far as to ask staff to stay home if they’ve been to China in recent weeks.

Fa Zhang says they’re hoping their customers will realize that and come around sooner rather than later.

“We do all the protections in case people worry about us but it's not about how we protect our customers, it's about our customers believe we are safety.”