Poppy campaign kicks off with presentation to London mayor 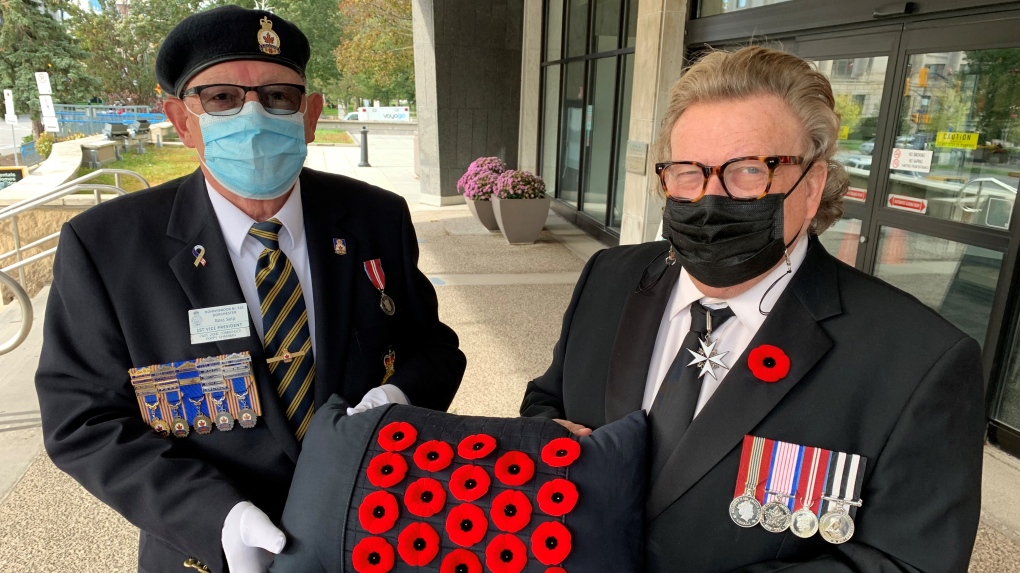 The local Royal Canadian Legion presented London Mayor Ed Holder with a poppy to kick off this year's campaign ahead of Remembrance Day.

"And I’m going to encourage Londoners to not just buy a poppy, but to ensure all of their family are wearing poppies, and to buy several. Because that modest amount that’s asked to be raised, that $240,00, which London can do -- basically it’s almost a dollar per citizen that gets us to that place," Holder said. "But we want you to put in more than a dollar because there are those that may not have access to the poppy box."

The campaign offically begins Friday, but the mayor and a  number of local police and military personnel were presented with poppies on Thursday.

Millions of poppies are distributed annually by the Legion with donations going to support veterans and their families.

With the goal of raising $240,000 this year, in addition to cash donations some locations are also testing electronic donation boxes.

Remembrance Day, Nov. 11, falls on a Thursday this year, and a ceremony is being planned at the Victoria Park cenotaph, but it will be limited.

While it will be larger than last year's scaled-down event, it will still be by invitation only, with only about 100 people in attendance.

Remembrance Day Committee Chair Randy Warden said they're hoping to include resident veterans from Parkwood Hospital in this year's event.

"With Premier Ford’s announcement last Friday promising more leeway, talks are underway to further include Parkwood resident veterans. The veterans will observe the ceremony up close yet from the safety of their buses. There is no marching parade this year. The participants will gather at the cenotaph at 10:30, and the service will include the laying of eight official wreaths."

But those wishing to lay a wreath can also do so ahead of the ceremony, Warden added, "Military units, veterans’ organizations, businesses and all Londoners will have an opportunity to lay a wreath, if they so choose, beginning at noon on Wednesday, November 10 until eight o’clock that night, or from eight o’clock in the morning until 10:30 in the morning on Remembrance Day."

Those who cannot attend in person will be able to watch the ceremony live here at CTVNewsLondon.ca.

We're partnering with @HSBC_CA again this year to make it easier than ever to donate & wear a Poppy with touchless "Pay Tribute" tap-enabled donation boxes! 1000 Pay Tribute boxes will be available across Canada beginning Oct. 29: https://t.co/LqicAsXnc7 #PayTribute #GetYourPoppy pic.twitter.com/uKutZzrSNT