London police held a news conference Monday afternoon, after seizing $360,000 worth of cocaine and marijuana.

Det.-Sgt. Chris McCoy says "It's an extremely significant seizure...When we have an opportunity to get a seizure of this magniturde, at the street level, using the resources we have on a day-to-day basis, yeah, it's significant and it will cause a short-term disruption in the availability of cocaine, we think, in the City of London."

On Friday, officers with London police and the RCMP executed search warrants at two residences – one on Proudfoot Lane and one on Tanner Drive.

Police say they located and seized 2.9 kg of cocaine and 6 kg of marijuana, as well as equipment for packaging drugs for re-sale.

McCoy says "We knew we were dealing with somebody who obviously is a  high-level drug trafficker. They're higher up in the food chain. You know when you get almost three kilograms of cocaine you know that they're definitely solid at that level and when there's evidence of re-manufacture you know that they're doing something more than what we would normally see at that level in our jurisdiction."

As a result, police have charged Mustafa Hassan, 23, and a youth with two counts of possession for the purpose of trafficking and drug  production.

The police investigation is continuing and investigators say there could be more arrests down the road. 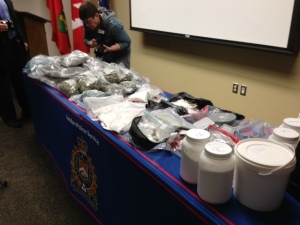