Two people who died in a multi-vehicle collision Thursday morning in the westbound lanes of Highway 402 have been identified.

Police say Kimberly McGuire, 22, of Plympton-Wyoming, and Jason White, 18, of Walpole Island, died at the scene of the 37-vehicle collision on the highway west of Oil Heritage Road.

A post-mortem is scheduled for Friday to determine the cause of death.

The 37-vehicle pile-up was one of three collisions that took place on Highway 402 in a short period of time and involved tractor trailers and passenger vehicles.

The road was re-opened Friday morning, after being closed for over 24 hours.

Const. Lisa Irwin had responded to a two-vehicle collision on Perth County Road 131 shortly after noon. She was in a fully marked cruiser with emergency lights activated and flares set up.

While she was on scene investigating, a northbound pickup from Milverton drove over the flares and struck the rear of the cruiser.

Irwin was treated in hospital for her injuries and is recovering at home. The two motorists involved in the initial collision, who had been seated in the rear of the cruiser, suffered minor injuries and were treated at the scene.

OPP are reminding drivers to take it slow and drive according to road conditions.

It took until late Thursday night, but all students with the Avon Maitland School Board did make it out, though not all made it home.

Treacherous driving conditions had stranded some students at 11 schools and left busses idling in parts of Perth County.

No one had to sleep at the schools, but some stayed with friends and relatives nearby, while others finally did make it home after 9 p.m.

The board is thanking members of the community for helping ensure the safety and wellbeing of students.

They are also praising the use of cell phones and social media for helping to keep parents informed. 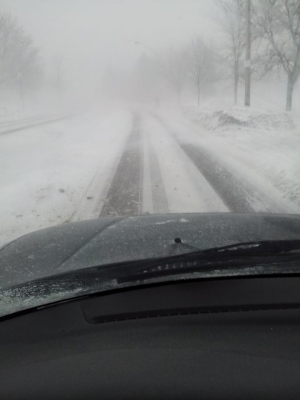