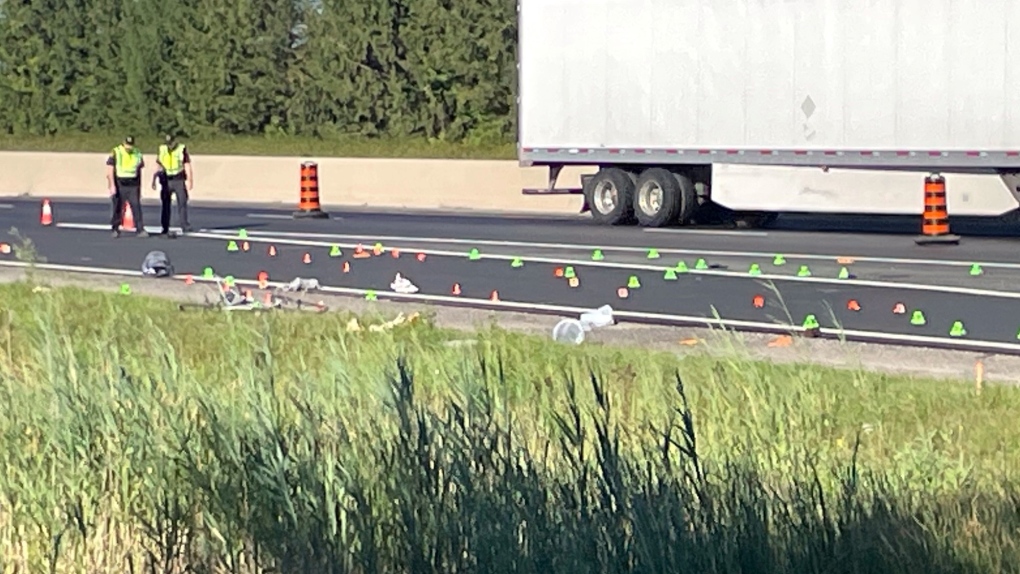 OPP investigators at the scene of a crash where a bicycle was struck on Highway 401 in London, Ont., on Thursday, Aug. 11, 2022. (Sean Irvine/CTV News London)

Police in London, Ont., are releasing the identity of a cyclist who was killed on Highway 401 after being struck by a vehicle.

The collision happened Thursday around 5:20 a.m. at the southbound Colonel Talbot Road exit.

The rider was pronounced dead at the scene.

On Friday, police confirmed the identity of the cyclist as 55-year-old Steven Panula of “no fixed address.”

The driver was arrested at a transport refuelling station on Highbury Avenue in London on the day of the collision, officers said Thursday.

Police said Friday the person they arrested is a 33-year-old man from Brantford. He’s been charged with failing to remain at the scene and failing to stop at an accident which resulted in death.

The 33-year-old has been released from police custody and is scheduled to make a future appearance in Ontario court.

Middlesex OPP are asking anyone with information regarding this incident to call 1-888-310-1122.

Rescuers searched for survivors among the ruins of Florida's flooded homes from Hurricane Ian while authorities in South Carolina waited for daylight to assess damage from its strike there as the remnants of one of the strongest and costliest hurricanes to ever hit the U.S. continued to push north.

Federal workers are increasingly cynical, skeptical and disillusioned about the idea of reporting wrongdoing in the public service, says a recent survey.