Family members of a young London man who was the victim of a hit-and-run have taken to social media to ask for help in finding the person responsible.

On Sunday, 18-year-old Tristan Roby of London was struck by a vehicle while riding his bike on Exeter Road near Wonderland Road.

Wednesday his 18th birthday, according to a post on Facebook by a man who identifies himself as Roby’s uncle and godfather.

In the same post Tino Casavecchia says that his nephew suffered a severe brain trauma.

“Instead of celebrating his 18th birthday like a normal teenager he is spending it in the Critical Care Unit with severe brain trauma...all because someone hit him while he was riding his bike & then fled the scene.

"I ask all of my Facebook Friends to share this in the hope that someone who was in the car or a witness can see this & realize the consequences. Perhaps even the person who hit him will see this & grow a conscience,” read the post on Facebook.

London police have not released the names of any suspects and no one has been arrested.

The driver of the vehicle reportedly stopped briefly before fleeing the scene. The vehicle was followed by a witness who then detained a fleeing passenger.

The vehicle was then held in a section of the Casa Blanca Motel on Wharncliffe for examination.

The investigation continues, and London police Sgt. Sean Harding says, "We have leads that we are following up on, but no arrests on the driver of the vehicle."

He adds that police are still seeing far too many incidents of collisions involving cyclists and motor vehicles. 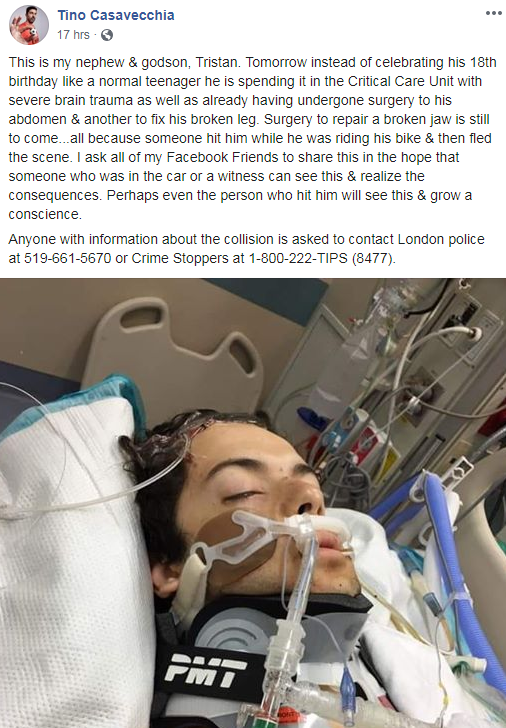