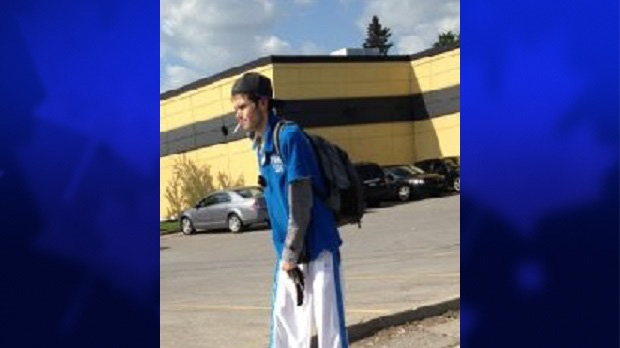 London police have released this photo of an attempted abduction suspect.

London police say Jeremy Sippel has now been charged with abduction in connection with an incident at the Gibraltar Trade Centre on Dundas Street on Sunday.

The 22-year-old London man had previously been charged with weapons offences in connection with a prohibited weapon found during his arrest on Monday.

Sippel was arrested a day after reports a man on roller blades was seen taking the hand of a five-year-old girl and trying to lead her away from the Gibraltar Trade Centre around 5 p.m.

She was allegedly released when the suspect was confronted by people in the area. A bystander also managed to capture a photo of the suspect.

Sippel remains in custody at the Elgin Middlesex Detention Centre and is scheduled to appear in court on Friday.

Police say they are also investigating reports that Sippel was assaulted around 1:45 a.m. on Wednesday while in custody.

London police Const. Ricardo Julio says “We did receive notice that Jeremy was assaulted while at the Elgin-Middlesex Detention Centre and he is currently still in hospital.”

Police are also reminding people to be cautious in light of these charges.

Julio says “Always be aware of where your children are, especially when you’re in unfamiliar areas. Just keep an eye on them, be vigilant. Not everybody out there has the best intentions.”