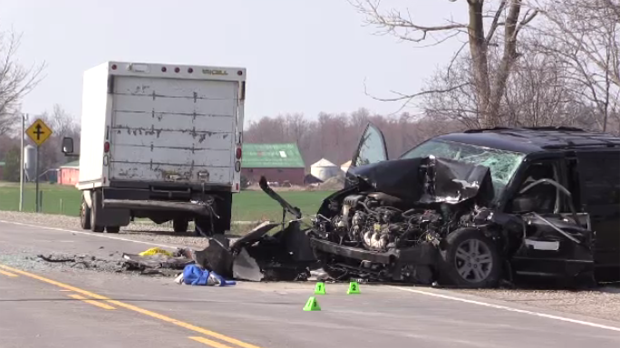 Middlesex OPP are still investigating a collision on Highway 4 north of London that killed a South Huron man on Saturday, April 15, 2017.

Middlesex OPP have released the name of a man who died of injuries suffered in a two-vehicle collision on Highway 4 north of London.

OPP say a black Dodge minivan was travelling northbound on Richmond Street north of Eight Mile Road when it struck the rear of a white Ford cube van just before noon on Saturday. The cube van was stopped to turn left into a private drive.

The 54-year-old man driving the black van had to be extricated from the vehicle. He died in hospital. The deceased has been identified as Thomas Dinney from South Huron.

The two occupants of the cube van were not injured.

Highway 4 was closed between Eight Mile Road and Nine Mile Road until 7:30 p.m. while the OPP’s Technical Traffic Collision Investigators examine the scene. The collision remains under investigation.