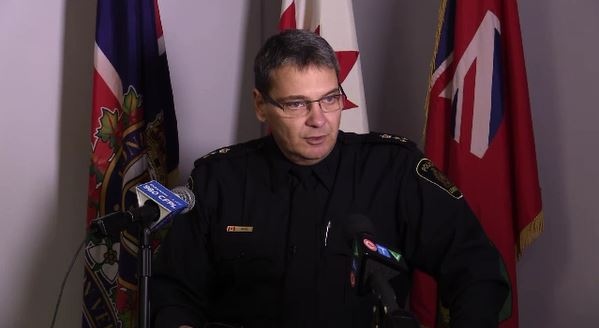 The London police chief issued an apology Thursday after inappropriate photos of one of his officers appeared on social media over the holidays.

The blackface photos of Const. Katrina Aarts, dressed in traditional African attire, were taken 11 years ago before she was a police officer. Her sister posted them on social media recently.

“On behalf of myself, the London Police Service and Cst. Katrina Aarts, I would like to apologize to all Londoners and particularly those in the Black community. The photos that were posted to social media of Cst. Aarts are clearly offensive and inappropriate,” Chief John Pare said in a statement.

London police’s professional standards branch conducted an investigation into any violations of the Police Services Act.

“It has been determined this incident occurred in 2006, a full decade before Cst. Aarts joined the London Police Service,” the statement said.

Pare said Aarts wrote a letter of apology immediately and is remorseful. He said she is taking cultural sensitivity and awareness training on her own and will take any other training the organization deems appropriate.

Pare also read an apology from Aarts, which in part read: “11 years ago, I dressed up in tribal costume with coils around my neck for Halloween. In preparing for this costume, I painted my skin dark brown.  At the time, I did not recognize the racial implications when choosing this costume. However, sitting here today, I am now forever remorseful for this decision.”