LONDON, ONT -- The action on the field looks nearly the same, however there are many subtle changes that can only be noticed if you look closely.

Minor baseball has returned around the province of Ontario but with COVID-19 guidelines in place.

"The first thing you notice is where the umpire stands," says Adam Stern, 18U manager for the Great Lake Canadians (GLC).

"He's behind the mound calling the balls and strikes from there to eliminate a close contact point. There is not high fives, only coaches are allowed in the dugout and the players are in lawn chairs down the baseline." 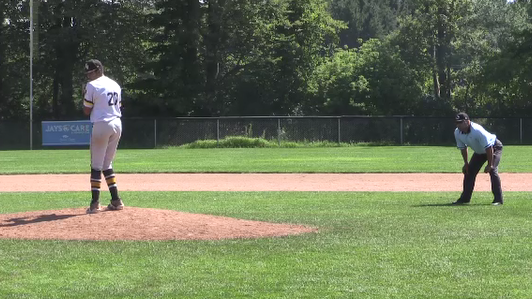 Those players are thrilled to be back on the field after initially thinking they wouldn't be playing games this summer. However it's tough to break routines they've done on the diamond their whole lives, like running through the dugout instead of into it.

"It's difficult when a guy makes a great play in the field, or scores a big run you just want to give him a big high five," says Henrik Vandermeer, a pitcher for the 15U GLC.

"You also want to chat about the game with you teammates but with staying six feet apart it's tough to do."

For Noah Grant, who had a hot bat in their weekend double-header against Burlington's Field House Pirates, it's been a bit disappointing to be confined to isolation on a game day.

"You don’t get to meet other players as much," says Grant, an outfielder for 15U GLC. 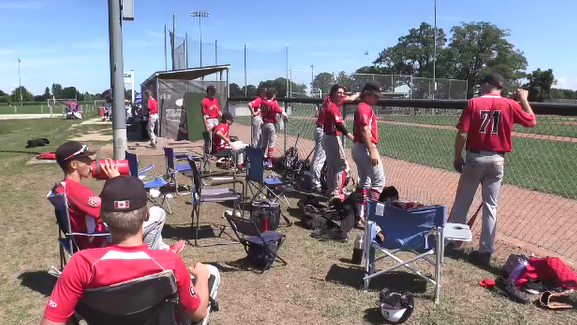 "Everyone on the team comes from different places, so this is where you see your buddies. Not being able to socialize and high five them is too bad."

There is hand sanitizer in the dugout, and players constantly reminded to wait their turn to enter the on-deck circle. It's understandable as they were anxious to hit, and also to have never had to keep distance in the past.

The Umpires also have a tough task of managing the COVID-19 guidelines and protocols. They handle the rules between the baselines on the field, while the coaches are responsible for their players.

Some of the umpires have called the game from behind the mound, but positioning can be tough if they need to sprint to the plate to call a close play.

The biggest thing for them is making sure everyone is physical distancing during visits to the pitcher's mound.

"There is no spitting on the diamond, and make sure everyone is distancing," says Dalbert Sanchez, a London umpire.

"We aren't here to be tough on the players, but we have enforce the rules and protocols to make sure everyone is safe."

With only three Canadian Premier Baseball League organizations fielding teams at the 15U level, they are playing weekend double-headers to get multiple games before they switch to the fall season in a couple weeks.

"It's been great for the kids to play once the province moved to Stage 3," says Stern.

"We've looked at every resource available to keep everyone safe as we navigate the waters that way. Big thing is keeping players, coaches and spectators safe."

As long as they follow the rules, they'll continue to hear the ball hit the mitt, the crack of the bat, and the umpire yell, "play ball".

Even if it is from a different location on the diamond.