Pipeline protesters take to the streets in downtown London 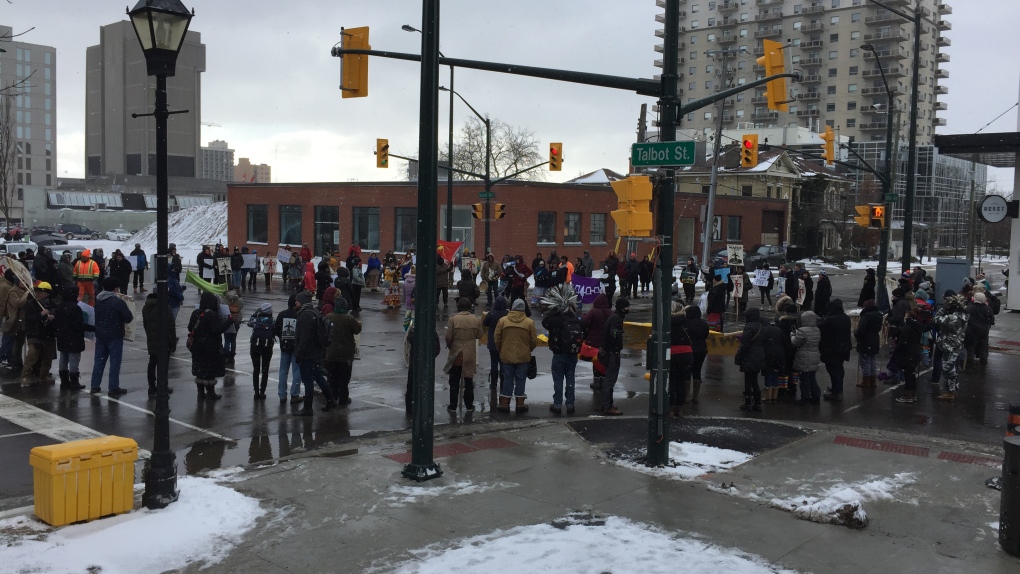 Activists in London, Ont. took to the streets Wednesday in solidarity with protesters in B.C. who oppose a natural gas pipeline project in that province's north.

About 200 protesters, many from area First Nations, assembled at Talbot Street and Dufferin Avenue before marching east to Richmond Street and heading north as far as Dundas Street.

Downtown business and traffic was disrupted for more than an hour while speeches were delivered and protesters chanted.

Police were visible along the sidelines, but there appeared to be no need for them to get involved.

In northern B.C., members of the Wet'suwet'en First Nation had been blocking access to the the area where Coastal GasLink wants to build a pipeline, until the RCMP stepped in.

On Tuesday, 14 protesters were arrested and the blockade dismantled as a court injunction was enforced.

The RCMP is now allowing contractors for the oil and gas company to pass through their roadblock to clear trees and debris from the road.

The main issue is that while the TC Energy says it has signed agreements with the elected councils of all 20 First Nations along the path of the pipeline, including Wet'suwet'en First Nation, opponents say the company failed to get consent from that First Nation's five house chiefs, who are hereditary - not elected.

Protests have been held in various cities across Canada in support of the anti-pipeline protesters.