BLYTH, ONT. -- Bodie Craig says it’s hard to imagine it was anything but a tornado that picked up his drive shed and tossed it 50 metres into a nearby field.

“I’ve seen lots of storms come through here over the years, but what hit this building must have been a whole lost worse because I’ve never seen damage in my life, like this."

Craig says he didn’t even have to time to make it to the basement, as Sunday morning’s storm careened towards his farm on St. Michael’s Road, north of Blyth, Ont.

“We heard the storm developing in the distance, sounded kind of mild. Ten minutes later it roared through here, and before I could move the building was flat as I looked out the window."

Although he didn’t see a tornado touch down, his neighbour reports seeing one.

While Craig’s shed took the brunt of Sunday’s savage storm, there was damage spread across the region, including nearby in Brussels.

“The storm created significant damage, particularly in the southern portion of Exeter, where a number of properties were hit hard. In the aftermath, I saw neighbours helping neighbours clear debris and lend a helping hand,” says South Huron Mayor George Finch.

Back near Blyth, the Craigs have a lot of cleanup and decisions to make on whether to rebuild their tossed and toppled shed or not.

“Big decision,” says Craig. “At my age it’s hard to know, but we hope to build something.”

Meanwhile, a dairy farmer in Lambton Shores says he has no roof to put over his cows’ heads, after the storm and possible tornado ripped through his property on Sunday causing catastrophic damages. 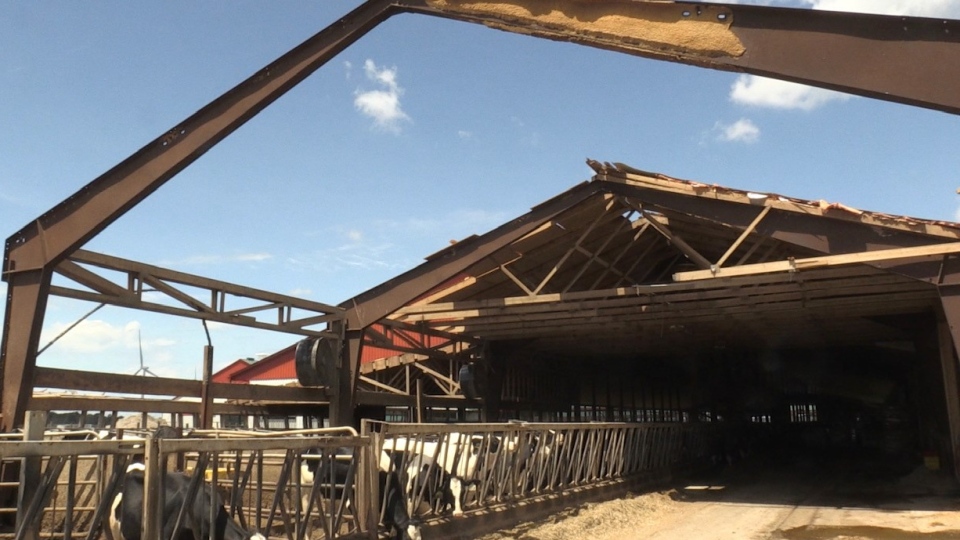 “I was in the storm basically, tires were flying around me but I didn’t get hit or nothing. When I got to the shed I turned around to look and everything was already gone,” says Eddy Van Elgenen.

Van Elgenen says that pieces of the barn’s roof are hanging from treetops on the property that he owns with his family. He estimates that damages are well over $500,000.

“This is the main barn it’s pretty much toast. It’s gone, so is that building,” says Van Elgenen.

Belmont is one area experts suspect a tornado tore through.

Trevor Marr, a Belmont resident, was just one person on West Street to have severe property damage.

“My neighbour actually called me and said, ‘Half your roof is missing and your trailer ripped into your house.’ (The storm) took half the shingles of the roof, ripped the vents out,” says Marr.

If a tornado is confirmed, it will be the second one in just over a month in the Belmont area.