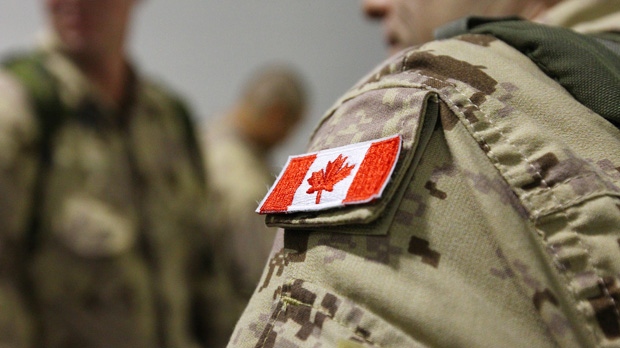 The Canadian flag is seen on the shoulder of a soldier waiting to board an Airbus CC-150 Polaris at CFB Trenton in Trenton, Ont., on Oct. 16, 2014. (The Canadian Press/Lars Hagberg)

The federal government has made good on a promised pay hike for members of Canada's military reserves.

Local MPs gathered with members of the reserves on Thursday to deliver the news that members of the army, air force and naval reserves will now receive the same base pay as regular force receives, plus the elements of the military factor that apply to reservists.

London North Centre MP Peter Fragiskatos says, "This is about fairness for you, our reservists."

Fragiskatos and London West MP Kate Young, on behalf of the Minister of National Defence, celebrated the change in reserve force pay structure at Wolseley Barracks in London, Ont.

The restructuring of pay is part of an overall vision outlined in Canada's defence policy - Strong, Secure, Engaged – and amounts to about a 7.8 per cent pay increase.

The policy also includes plans to increase the Reserve Force by 1,500 members and further integrate reservists into operations.

The reserves are crucial to the success of the Canadian Armed Forces.

Fragiskatos says, "In Afghanistan they comprised roughly 20 per cent of overall troops. In our NATO contributions, in the Latvian mission, for example, they're playing a fundamental and central role as well. We want to acknowledge that.”

Reservists come from all walks of life; students, civil servants, labourers, business people, academics and former members of the regular force, and will now receive more money to more fairly compensate them.

Colonel Christopher Poole, commander of 31 Brigade Group based in London, says, "Studies show that pay, or compensation in general, in and of itself is not a satisfier but it can be a dis-satisfier.

"So anything we can do to make the pay more competitive is a good thing. It is always a fight for talent. It's a competitive job market out there. We need to be able to attract soldiers and then retain them in the army reserves."

Previously, Reserve Force pay was a simple 85 per cent calculation of the total Regular Force pay, which is made up of base pay and military factor.

The military factor is a percentage added to the base salaries that compensates them for additional requirements that don't affect most public servants.