A part of the old Centralia College in Huron Park has been destroyed by fire.

Crews from five fire departments arrived on scene around 11:30 Wednesday night to find one of the former dorms engulfed in flames.

They were able to contain the blaze to the old Bruce Hall, but the building is significantly damaged, says South Huron Fire Chief Jeremy Becker.

Crews remained on scene of the three-storey building fire Thursday morning and were expected to be there all day.

Becker says the building was being renovated at the time of the fire, but with the extensive smoke and water damage he expects the building will have to be torn down.

As many as 80-85 firefighters from South Huron and North Middlesex were on scene to battle the stubborn blaze at its peak.

There’s no official cause or damage estimate yet, but the fire isn't considered suspicious at this time. 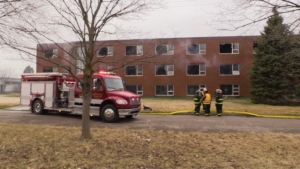