LONDON, ONT. -- An Otterville, Ont. woman will be the face of a new Canada Post stamp as part of a tribute to Canadian female pilots.

Emily Crombez, 32, was chosen to be on the 2020 stamp by the East Canada Section of the Ninety-Nines, an international organization of women pilots. 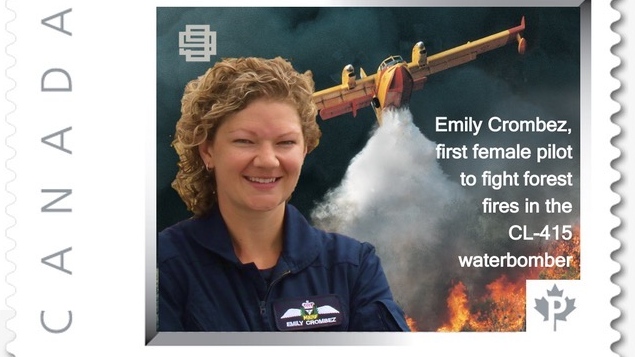 In 2014, she became the first female pilot to crew the aircraft, fighting forest fires, something that she particularly enjoys.

“Firefighting involves scooping up many loads of water and dropping them in a specified fire target area, while often encountering updrafts, turbulence and smoke. You are heavy and slow, performing steep maneuvers, exercises you are usually taught to avoid," says Crombez.

Crombez's desire to fly started at an early age, obtaining the requirements for a private pilot's licence by 16, and gaining her recreational pilot permit at 17.

The fact that there were few female pilots at the time did not bother her – in her flight school class of 31, three students were female.

She graduated from Confederation College’s Aviation Flight Management Program and since then, worked as a pilot in northern Ontario with Bearskin Airlines, making her way to ﬂying Boeing 737s for Westjet and Boeing 787 Dreamliners for Air Canada.

Now, she loves to inspire girls when they see her in her pilot uniform, and hopes they know flying is an option for them.

“Often times I see the double glance or the double take a look as I walk through airports how especially that I’m with the airlines.”

The stamp will be officially launched on June 19 at the Tillsonburg Airport.

“I think I’m still a little bit shocked that my face will be on a stamp, but I’m very honoured they did select me.”

The stamps are not available in stores and must be ordered online here.