Owen Sound police say a 17-year-old male and a 24-year-old female have been arrested in connection with several fires that were allegedly intentionally set Monday morning.

Appearing in court Tuesday, he was denied bail and is scheduled to return to court Aug. 18th.

Officials say the female was arrested Tuesday afternoon near the courthouse in Owen Sound, and further details will be released soon.

Police also say the investigation is continuing and suggest a third arrest is expected.

In a statement, Owen Sound police Insp. Vince Wurfel said, “Our investigation indicates that we are seeking at least one additional suspect. Although we are making positive strides in our investigation there is still much work to be done.

“We have significantly diminished the risk to our community in relation to a re-occurrence of these events, however we would like to remind the community to remain vigilant until all suspects are apprehended.”

Every investigator the Ontario Fire Marshal's Office has was in the city Tuesday to probe the blazes.

In total, residents of 15 homes and apartments were displaced after the eight separate fires in Owen Sound and 10 people were treated in hospital.

The fires have reportedly left 23 people homeless, and six of those families were without insurance.

The Hagen and Traplin families were both without insurance, but say it's the lost mementoes that hurt the most.

Sandy Hagen says, "My oldest son died of cystic fibrosis and all my memories of him are all gone in the fire."

Rose Traplin has trouble containing her anger, saying, "He could have killed everybody. Why would somebody do that? We don't know who he is, he doesn't know us, why would he do it." 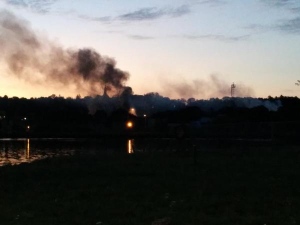