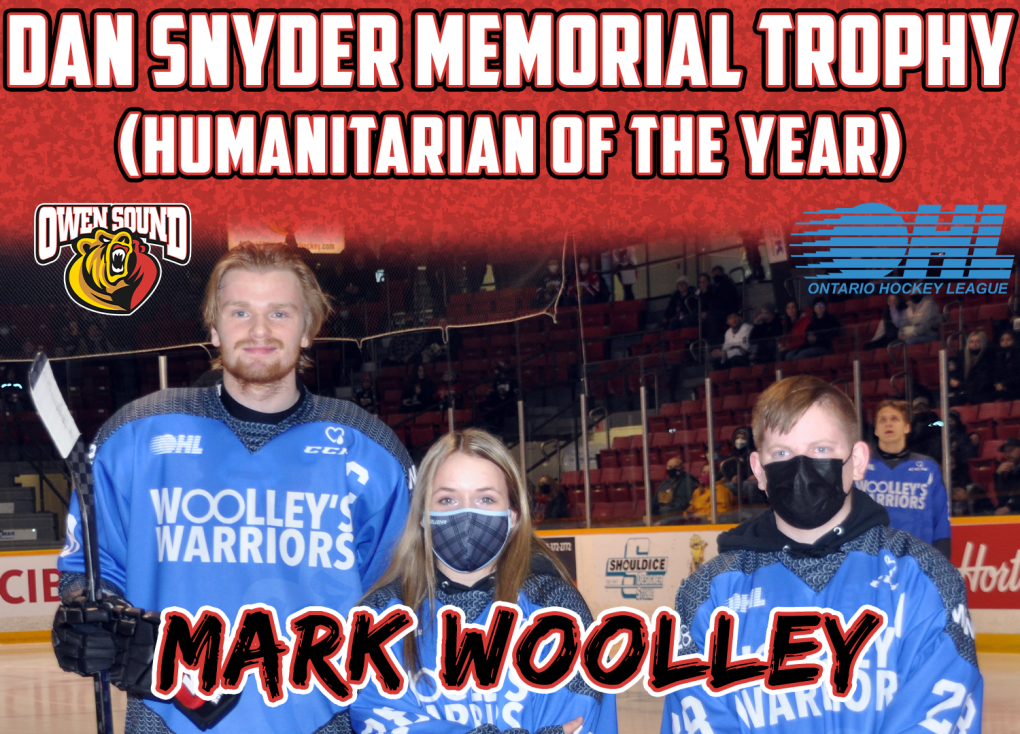 The Ontario Hockey League (OHL) announced Thursday that Mark Woolley of Owen Sound Attack is the 2021-22 recipient of Dan Snyder Memorial Trophy and is OHL Humanitarian of the Year.

The Attack captain was diagnosed with type 1 diabetes as a teenager, and in a press release called Woolley “a leader on and off the ice.”

Woolley has raised $25,000 towards Diabetes Canada during the 2021-22 season, contributing more than $60,000 through his Woolley’s Warriors initiative over the course of his five-year OHL career. The funds raised are used to send children to Diabetes Canada D-Camps.

"I’m extremely honoured to have been selected by the league for such a prestigious award," said Woolley. "If you take a look at all the past winners of the Humanitarian Award there are some pretty special names that were involved in their community on that list, so to be recognized on that stage is a huge accomplishment that I am very proud of.”

“Obviously it’s my face and name on the front of Woolley's Warriors, but I just want to make sure I give proper thanks to everybody who has been involved thus far. There are so many little details that go on behind the scenes and without the amazing support I’ve gotten along the way none of this would have been possible,” he said.

Attack General Manager Dale DeGray voiced his congratulations at the news, and commended Woolley for his generosity and leadership despite the uncertainties surrounding the COVID-19 pandemic.

"He is a very worthy recipient of this award and the Attack organization is proud to see him furthering the legacy of Dan Snyder, who made a tremendous impact on the city of Owen Sound,” DeGray said.

Woolley is also a force to be reckoned with on the ice, scoring 12 points over 54 games during his career with the Attack.

“To the Guelph Storm and the Owen Sound Attack, thank you for giving me the opportunity to grow in two outstanding organizations and for shaping me into being the young man I am today,” Woolley said.

Montreal has 17 suspected monkeypox cases; officials say it's 'not highly contagious' or severe

Montreal Public Health said they're asking health workers to be alert for monkeypox cases but said the illness is also not extremely contagious and is the milder of two strains. There are 17 suspected cases in the Montreal area.

The former clerk of the British Columbia legislature has been found guilty of fraud and breach of trust in connection to allegations of improper spending made against him.

An expert in Canadian policing says the New Brunswick officer who killed a 26-year-old Indigenous woman during a wellness check two years ago was following police training.

Prince Charles and Camilla, Duchess of Cornwall, have started their journey to Canada's North, where they are scheduled to speak with First Nations chiefs as the final day of the royal visit focuses on Indigenous issues and climate change.

The spotlight in a Virginia courtroom has turned to attorney Camille Vasquez this week.