Damage is estimated at $800,000 and officials are investigating the cause of a large overnight barn fire near Mitchell, Ont.

Emergency crews were called to the fully involved structure fire about 7 p.m. Tuesday on Perth Line 42, just west of Highway 23.

Once firefighters were on scene, the blaze had breached the roof, according to West Perth Fire Prevention Officer James Marshall.

“The structure was involved on the rear of the building,” he said. “It had breached through the roof and there was heavy smoke conditions blowing across the highway.”

Marshall said crews from seven area fire departments were on scene. The blaze took about five hours to put down. No one was hurt, but 22 pigs were lost.

“It was a very large fire,” said Marshall. “It had the potential to be twice as big. We brought in resources we needed to ensure we were out of there as quickly as possible and that as minimal damage was done at the building.”

The number of barn fires involving livestock in Ontario is trending down, according to the Ontario Ministry of Agriculture, Food, and Rural Affairs (OMAFRA). 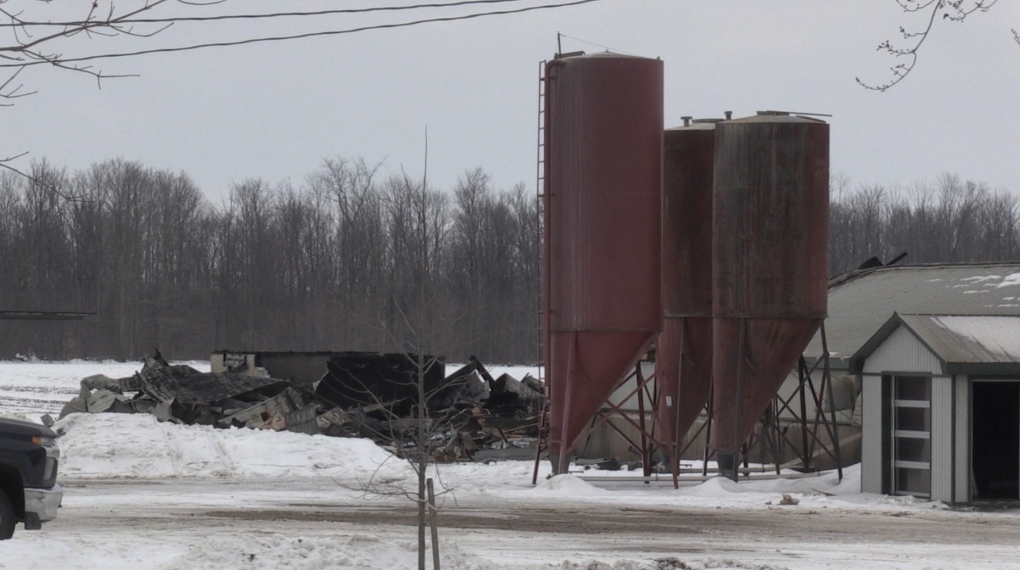 The scene of a barn fire near Mitchell, Ont. as seen from the road, Jan. 18, 2022. (Bryan Bicknell / CTV News)OMAFRA West Region regional manager Dan Carlow tells CTV News that in the last 10 years, barn fires with loss of livestock averaged about 12 to 18 per year. That’s down from 24 to 36 in the decade prior. Carlow said there is now more focus on prevention.

“Now we’re seeing barns larger in structure with open air. Some of them with curtains instead of side walls. Less wood involved, so less material to burn,” says Carlow. “One thing that we’re seeing different is annual inspections. Fire prevention folks sometimes preview a barn and point out areas of risk and the producer can address those.”

And while insurance generally covers barn fires, Carlow said losses in livestock can still be devastating for farmers.

“The individual livestock that the farmer had raised and had become very attached to have now disappeared. Often times they’re losing genetics and it’s always hard to overcome,” he said.

In the meantime, investigators are still trying to determine the cause of the Mitchell area fire.

Marshall said it is not considered suspicious.