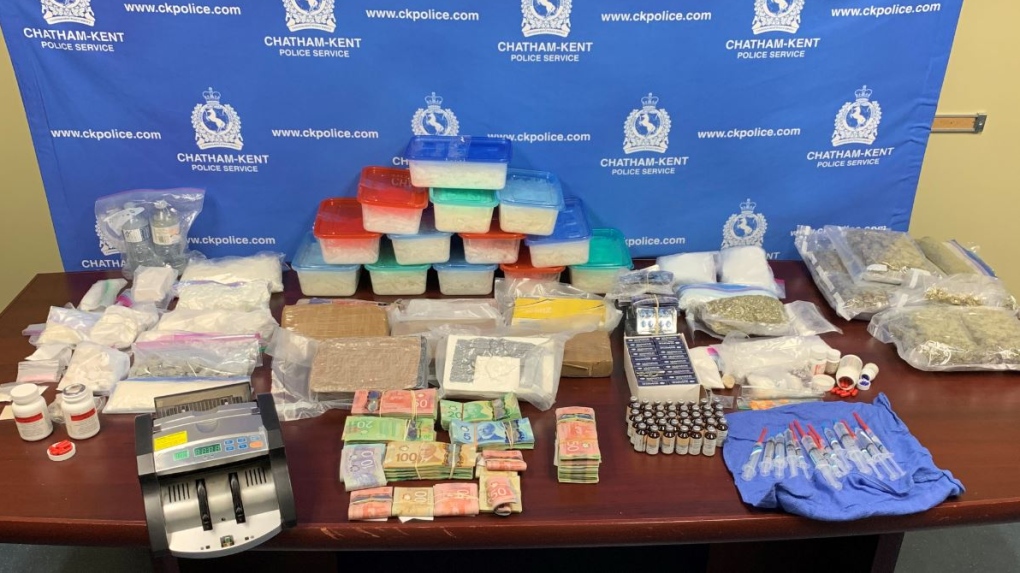 More than $2.6 million in drugs, along with cash and guns were seized in a raid in Chatham, Ont. on Wednesday, April 10, 2019. (Source: Chatham-Kent Police Service)

A 35-year-old Chatham man is facing charges after police seized over $2.6 million in drugs from an apartment.

Members of the Chatham-Kent Police Intelligence Section executed a search warrant at an apartment in Chatham on Wednesday night.

Police say an electronic digital scale, packaging materials, $52,000 in Canadian currency along with a 9mm hand gun and ammunition were also seized.

In a statement, Chatham-Kent police Chief Gary Conn commended all of the officers who worked on this project.

“This was both a lengthy and tedious investigation requiring the use of many resources,” says Conn. “I have been saying for some time now that a lot of our property crime, especially break and enters are tied back to drugs, as there is a direct correlation between these offences. “

A Chatham man has been charged with nine counts of trafficking and nine additional firearms charges. He was remanded into custody pending a bail hearing on April 15.

Conn said the force is committed to mitigating and fighting against the sale and consumption of illicit drugs in the community.

“The execution of this search warrant and eventual seizure of these controlled substances with a street value of $2,669,290 is proof of that commitment...This bust is the largest in Chatham-Kent history, which has resulted in an arrest and 18 drug and weapon related offences.”

Conn added that it is usually just a few drug traffickers who are the main source of bringing drugs into the community.