LONDON, ONT -- The municipal golf courses in London, Ont. are now closed for the season.

It was a roller coaster year for the city after starting two months late due to the pandemic. They got some push back with the closure of River Road Golf Course but overall saw the most players in nearly a decade.

"Between the two courses at Fanshawe & Thames Valley we think we'll put in 110,000 rounds after this weekend," says JP McGonigle, division manager of London parks and recreation.

Tee sheets were packed nearly every day from opening to close after the courses opened in the middle of May. However starting two months later than expected made it difficult to make up lost revenue.

"We thought we would lose about $150,000 this year and we think we will be in and around those numbers," says McGonigle.

"Staggered tee times are usually at 8 minutes, and we began at 12 minutes. That's about 360 people per day across four courses. With food and beverage and retail impacted it's a difficult ground to make up."

The city says River Road Golf Club would have lost money even though the demand for golf was through the roof. Many city members were frustrated and even organized protests to object to the closure.

"River Road is our home course, and it is my favourite course," says Mark Graham who was playing Sunday.

"The closure made it really tough to get tee times on the city courses."

The difficulty finding tee times was evident all around Southwestern Ontario. Most players were forced to book seven days in advance. Many didn't get the time they wanted and were forced to take whatever was available

"I found with the pandemic many new faces came into the game," says Errol Lake who came from Brampton to play Thames Valley Sunday.

"Golf was the only sport to be outside and keep distancing. There was a tremendous amount of new golfers who came into the game and that it made it more difficult to get a time."

Some courses will remain open all year but the municipal courses are now closed. 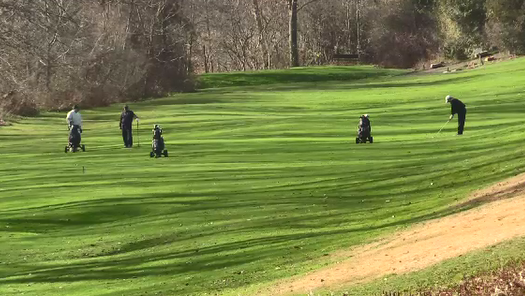 "It could be hit and miss, if we get a nice stretch we might keep some pins in at the Hickory 9 to give some recreation through the winter," says McGonigle.

"In the past we've been open up until Christmas but we've also been closed in early October so weather dictates when we close our season. We've been lucky this year considering we didn't get started until the end of May."

London's parks and recreation department will take a report to city council in early 2021.

They will have a complete financial breakdown as well as a projected outlook for next year.