SARNIA, ONT. -- Just days after the famed Holy Roller memorial tank in London’s Victoria Park was vandalized, another attack on a veterans' memorial has occurred in Sarnia.

A statue of a soldier, affectionally known as ‘Tommy,’ has been desecrated at Sarnia’s Veteran’s Park.

Even more upsetting, Tommy adorns the top of the city’s cenotaph to its war dead.

The discovery, publicized by police this week, was actually made on Saturday during a cheque presentation.

Ron Realesmith, of the Sarnia Historical Society, states another person at the small physically distanced event, looked up and said, “I think his gun’s missing.”

Realesmith says his brain did not believe what his eyes were seeing.

“I said, ‘There's no way.' So, I pulled out my phone and started looking at old pictures of Tommy, and yes, the gun was missing.”

Realesmith's picture shows Tommy is now missing his rifle, a genuine disarmed First World War gun, attached to him nearly a century ago. The gun and Tommy have been here since the cenotaph was dedicated in November of 1921.

Les Jones, the 1st vice-president of Branch 62 of the Royal Canadian Legion, who was also present on Saturday, says the pending anniversary has made the crime even tougher to accept.

“I’m in total disbelief that someone would do this. Tommy has stood there for almost 100 years, never tampered with, and to have this happening is so disheartening.”

But the loss goes beyond the missing rifle.

It turns out, Realesmith says, the thieves wanted the entire statue.

“They were looking to take the entire Tommy structure down. And, they almost got it.”

Realesmith, Jones and now Sarnia police have noted someone tried to loosen the bolts securing Tommy to the top of the memorial. 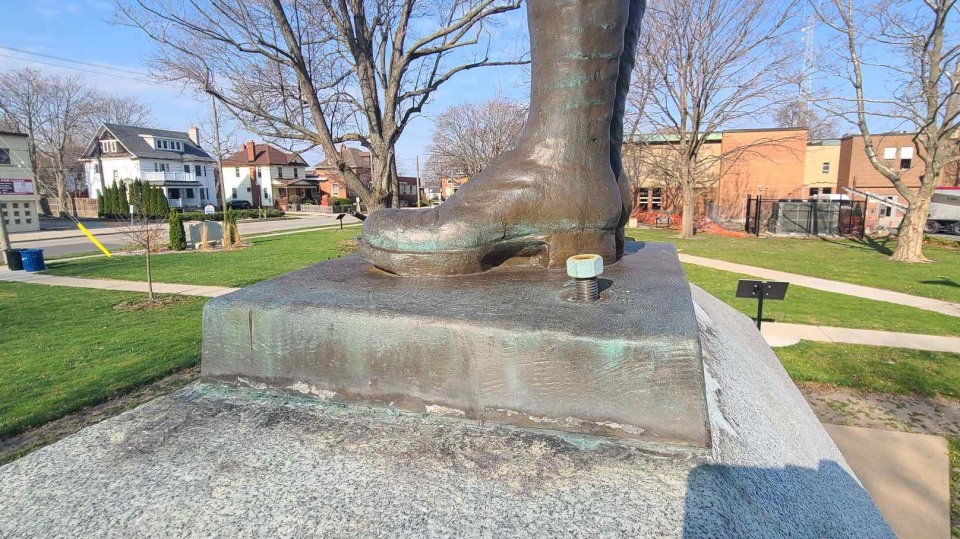 A boot, securing Tommy to the city's cenotaph is seen loosened in Sarnia, Ont. on Thursday, April 8, 2021. City workers were to arrive Thursday to secure it once again. (Sean Irvine / CTV News)

Const. Giovanni Sottosanti says it's a crime police want desperately to solve. And given the limited scrap value of the gun, he’s hopeful thieves will have a change of heart and reconsider their actions.

“It’s no different to us as someone going into a cemetery and toppling down tombstones in memory of someone who had died.”

Jones is hopeful the culprits are found, but at minimum, he just wants the gun back.

“Please just take it and drop it off somewhere and call Crime Stoppers.”

But if that doesn’t happen, Realesmith is confident the Sarnia community will come through to ensure the valiant names remembered here are recognized by a fully outfitted Tommy.

Already two city organizations have confirmed they will help cover some of the $3,000 to $7,000 cost.

"We’ve had such great community support and feedback. I am certain that we are going to come up with the funds needed to make sure we put the rifle back in place," Realesmith concludes.