TORONTO -- The president of one of Ontario's largest teachers' union -- who angrily denounced the governing Liberals for imposing contracts on teachers earlier this year -- will run as the party's candidate in an upcoming byelection.

There were reports earlier Friday that the party was parachuting Coran in as their candidate in the London West byelection, which has yet to be called.

"After an extensive search, the nomination committee put forward only one name to the Ontario Liberal Party office -- Ken Coran," Courtice said in a statement.

"Coran was also the only candidate to file nomination papers with the Ontario Liberal Party."

Courtice said Coran has lived in London for nearly 40 years and has been a long-time member of the London West Provincial Liberals Association.

"I believe in Premier Wynne and it is her values of collaboration, openness and honesty that have drawn me into politics," Coran said in a statement.

"I have never been shy about expressing my views so rest assured I will be a strong and loud voice for the families of London West at Queen's Park."

Coran was among the union heads who excoriated the Liberals for imposing contracts on English public school teachers in January. The OSSTF and other unions also launched a court action against the government over the contracts, which is still ongoing.

"In fact, he wrote a confidential memo to the OSSTF stating that he was responsible for bringing Premier McGuinty down and causing all these resignations within the government," said Progressive Conservative Rod Jackson.

"Now he's one of their candidate? Pretty rich."

Dalton McGuinty officially stepped down as premier in February, after announcing his intention to resign last October, and resigned his seat June 12. Four other Liberals have also quit.

The government settled the labour dispute over the contracts by negotiating new terms that have been accepted by public elementary and high school teachers in recent months.

Jackson said Coran's candidacy shows there's a very cosy relationship between the Liberals and the unions, who have "cut some really great deals" with the government.

"Just a few months ago, the teachers' unions were railing out about this government, how unfair and corrupt they were," he said.

Parachuting Coran in as the Liberal candidate will backfire with voters, Jackson said.

"This agreement with teachers has not sat well with the general public. We know that," Jackson said.

"And this appointment of this parachute candidate in London won't sit well with the voters."

The Progressive Conservative candidate is Ali Chahbar, a lawyer who ran for the party in the 2011 election. The NDP are represented by Peggy Sattler, a school board trustee and policy director at a research consulting firm.

Jackson said the Tories will target the other parties' candidates in all five vacant ridings in London, Windsor, Ottawa and Toronto.

Premier Kathleen Wynne has until Aug. 15 to call byelections in Windsor and London, seats that were given up by former finance minister Dwight Duncan and former energy minister Chris Bentley.

There should be a general election instead to boot the Liberals out of office, Jackson said. 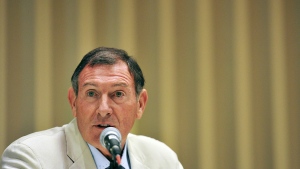