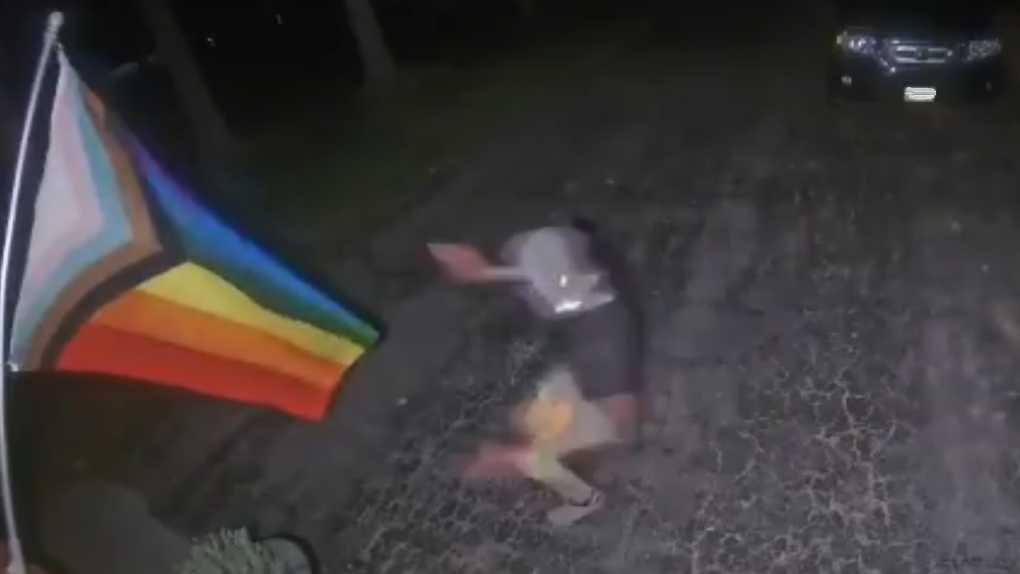 An unknown suspect is seen in security footage ripping down a Pride flag in Norwich, Ont. (Supplied OPP)

LONDON, ONT. -- Provincial police in Oxford County are investigating after a Pride flag was stolen from a residence in Norwich, Ont. the latest incident involving Pride symbols in southwestern Ontario.

Police released footage of the incident and are hoping members of the public may be able to identify the suspect.

The footage comes from a residential security camera overlooking the homeowners laneway.

The Pride flag can be seen hanging in the left when an individual runs up the laneway and tears the entire flag and pole down.

Anyone with any information is asked to contact OPP in Oxford County.

#OxfordOPP looking to identify this person of interest in relation to mischief and theft of a Pride flag in #Norwich @OxfordCounty If you have any information please contact #OPP 1-888-310-1122 or @CrimeStoppersOC 1-800-222-8477^pc pic.twitter.com/T3vEasXta7

On Monday CTV London brought you the story of a London man who had his flag stolen in a similar fashion.

A flag was ripped down from a Burlington residence earlier in the month, and a flag was recently stolen from a school in Dunnville.

Pride signage from residences were also stolen in Dunnville.

In Owen Sound a rainbow crosswalk was vandalized over the weekend.

Anyone who has information or may have witnessed these incidents are asked to contact local police.