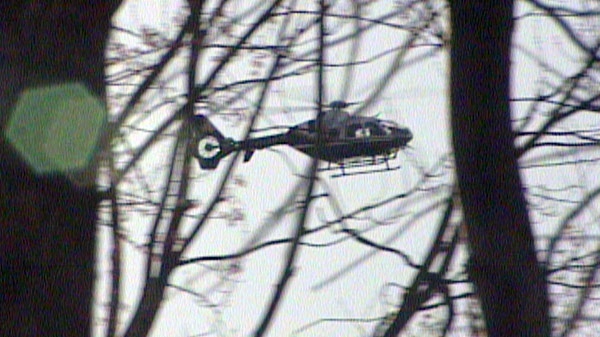 An OPP helicopter takes part in a search of south end Guelph, Ont. on Thursday, April 12, 2012.

Grey County OPP continue the search Thursday for an 84-year-old man who has been missing since Tuesday afternoon.

An OPP helicopter has now joined in the search.

George Handzik, 84, of Napoleon Street, Eugenia, was last seen around 4:30 p.m., riding his bicycle eastbound on Concession 8 towards the causeway in Eugenia. He was reported missing to police at 7:30 p.m. Tuesday.

Police now say the bicycle he was riding was a small, black mountain bike with some red on it.
Handzik suffers from dementia, but is otherwise in good physical condition.

He is white, five-foot-eight, 160 to 180 pounds, with short white hair. He was wearing prescription glasses, a blue jacket with white stripes, a beige shirt, dark coloured pants, and Velcro runners.

Anyone with information regarding his whereabouts is asked to contact the OPP at 1-888-310-1122 immediately.