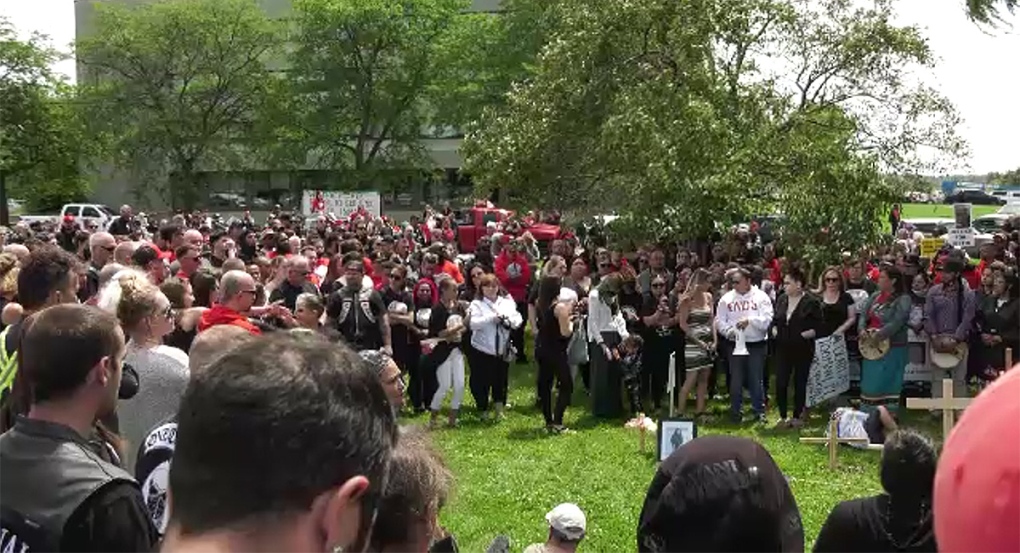 Ontario Solicitor General Sylvia Jones was in London, Ont. on Thursday to meet with staff at the Elgin-Middlesex Detention Centre (EMDC).

Jones had promised to visit after the union representing guards there raised concerns about alleged harassment and intimidation of workers at the jail.

The issues reportedly began in the days after a rally outside the jail on July 17. OPSEU said protestors were stopping cars, photographing staff and licence plates, and threatening staff on social media.

The rally was held following a memorial for 32-year-old Brandon Marchant. He died in hospital on July 6 after being found unresponsive in his cell three days earlier.

His was the latest death connected to the institution. Since 2009 there have been 19 deaths associated with EMDC.

In an emailed statement, Jones said heard from staff about the situation they have been facing.

"The daily protests over the past number of weeks have been challenging for staff at the facility, and I want to thank them for their professionalism and ongoing commitment to community safety."

She added that the facility has remained secure, and ministry officials are working with local law enforcement to ensure the safety of staff and inmates, while "respecting the right of Ontarians to peacefully protest."

In addition, Jones responded to those who've experienced loss, saying, "I would also like to express my sympathy to the families who are grieving the loss of loved ones or are waiting for the details offered through death investigations."

The meeting was not open to the public or media.

In response to the visit, OPSEU President Warren 'Smokey' Thomas issued a statement Thursday evening saying he was glad she decided to visit, but disappointed she did not accept an offer from the union to tour the facility.

"In my point of view, that was a missed opportunity to meet with front-line corrections workers and to better understand their experiences during the last few months."

According to OPSEU, Jones met with EMDC management and two union members, so they are encouraging her to return to meet with union officials and hear from front-line staff.

"Our front-line members understand the challenges of the situation and are willing to work together to find solutions and ensure a positive outcome. We respect the families of those who have passed away at EMDC and their right to grieve. We welcome discussions on how to support grieving families while protecting the mental health and safety of our members."

OPSEU continues to raise concerns about underfunding of corrections facilities and the need for improvements to infrastructure and inmate living conditions.