LONDON, ONT. -- One single postal code in Middlesex-London region has the highest percentage of COVID-19 positive cases in all of Ontario, leading some officials to push the government to deem the area a hotspot.

The postal code is N6A and it houses a percentage of Western University and stretches along Richmond Street.

According to provincial data, from March 28 to April 3, 28.97 per cent of COVID-19 tests came back positive for those living in the N6A postal code.

“It is quite concerning to see the highest rated hotspot in Ontario, being right here in London,” said Dr. Chris Mackie,  medical officer of health for the Middlesex-London Health Unit (MLHU), in a media briefing on Monday afternoon.

“The N6A postal code does capture much of Western University area as well as surrounding neighbourhoods,” said Dr. Alex Summers, associate medical officer of health with the MLHU.

The university as a whole is experiencing pockets of outbreaks, with eight active residence outbreaks in total. 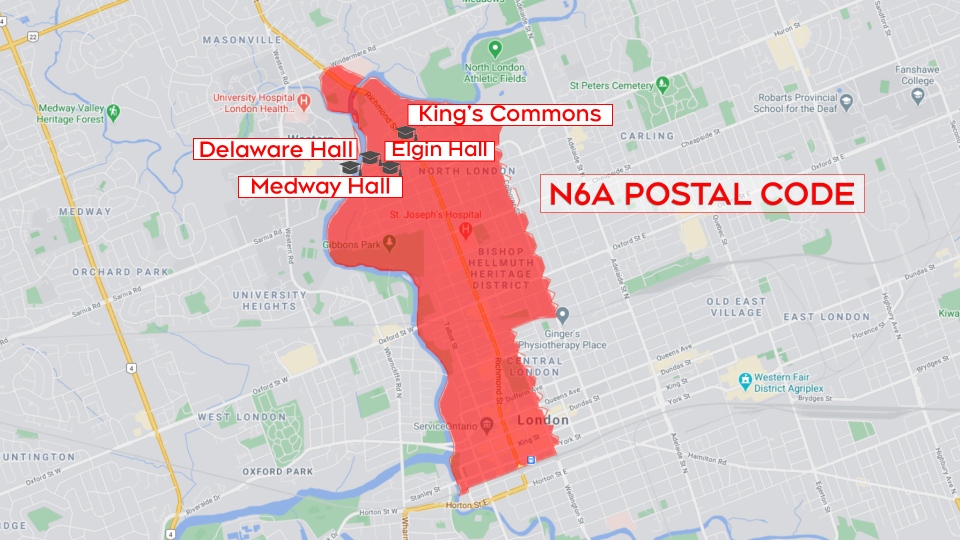 The eight residences with outbreaks and the accumulated cases as of Monday are:

A rise in the number of outbreaks earlier this month pushed university officials to ask students living in residence to move out if they can.

Chris Alleyne, vice-president of Western’s Housing & Ancillary Services told CTV News in a statement on Monday, "To date, 60 per cent of the students in our residences have moved out.”

Summers said the cases are predominately in the 18 to 22-year-old bracket, with most activity attributed to social clusters and residence outbreaks.

NDP member of parliament for London North Centre, Terrance Kernaghan, said the postal code needs to be deemed a hotspot.

“We need N6A to be declared a hotspot, we need the province to immediately deploy mobile vaccination units as well as administer funding so we can get on top of testing as well as contract tracing, we just need more vaccines.”

In Monday's briefing, Mayor Ed Holder said talks are underway to see if the London postal code will be deemed a hotspot.

“Without question London is a hotspot…. All I can say at this time is that those conversations are ongoing.”