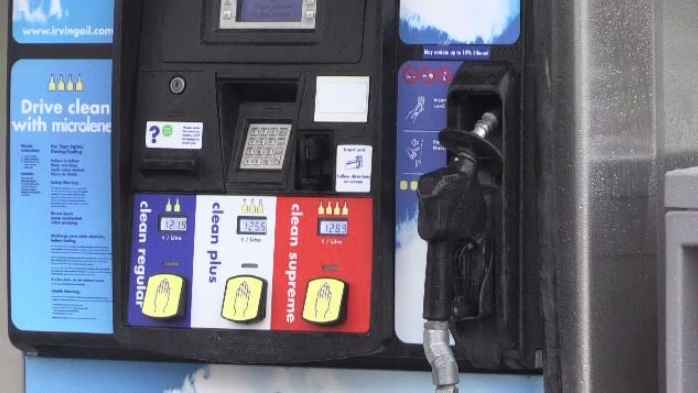 During a pandemic, when people aren't on the roads as much, motorists wonder why gas increased more than four cents per litre this week in Nova Scotia and New Brunswick.

TORONTO -- A law requiring gas station owners across Ontario to post anti-carbon tax stickers on their pumps came into force Friday, but the province said it won't be issuing fines right away for those who don't comply.

A spokeswoman for Energy Minister Greg Rickford said inspectors who will be checking for the mandatory blue decals won't create a burden for businesses.

"For the first few months, inspectors are focusing on education and helping gasoline retailers come into compliance," Sydney Stonier said in a statement. "After this initial period, inspectors could issue warnings and lay charges as they deem necessary."

The law brought in by the Progressive Conservative government -- which has been waging a legal and public relations battle against the carbon tax since taking power last summer -- lays out a series of penalties that can be issued against those who fail to display the stickers.

Premier Doug Ford has said the stickers are part of an effort to educate people about the costs of the carbon tax, but critics have called them misleading, taxpayer-funded propaganda ahead of the Oct. 21 federal election.

Last week, Ford said that gas station owners who don't put the stickers on their pumps will face fines but stressed that they would be less than the maximum penalty of $10,000 a day.

The government has earmarked $30 million for its fight against the carbon tax, which includes the legal case it is taking to the country's top court and the sticker campaign.

The stickers show the federal carbon tax adding 4.4 cents per litre to the price of gas now, rising to 11 cents a litre in 2022. They do not include information about rebates available to residents.

The carbon tax is expected to cost a typical household $258 this year and $648 by 2022. Residents of provinces with the tax will be getting rebates on their income tax returns that start at $128 annually and increase for people with spouses or dependents at home.

At one gas station in downtown Toronto, the decals were receiving mixed reviews from some drivers.

But Rachel Comiskey said she supports the Ford government's opposition to the carbon tax. The 26-year-old said she does a lot of driving for work but the per-kilometre allowance provided by her employer isn't increasing, even if the cost of fuel is.

"Having the carbon tax push-back is beneficial to us," she said.

"Ford is forcing small businesses, and some big businesses, to carry propaganda," he said. "This is propaganda that's undermining climate action and that's dishonest."

"It looks like a Conservative campaign sign," said the group's senior energy strategist, Keith Stewart. "We have the government spending our money to print the stickers that companies have to post or face massive fines."

Green party Leader Mike Schreiner has launched his own free stickers that outline the costs of not taking action to address climate change and said Ford was making the wrong move.

The Tory plan has also drawn criticism from Ontario's Chamber of Commerce, who in April said the stickers violates the rights and freedoms of gas station operators. The sticker plan has also drawn the threat of a legal challenge from the Canadian Civil Liberties Association.

-- with files from Lidia Abraha