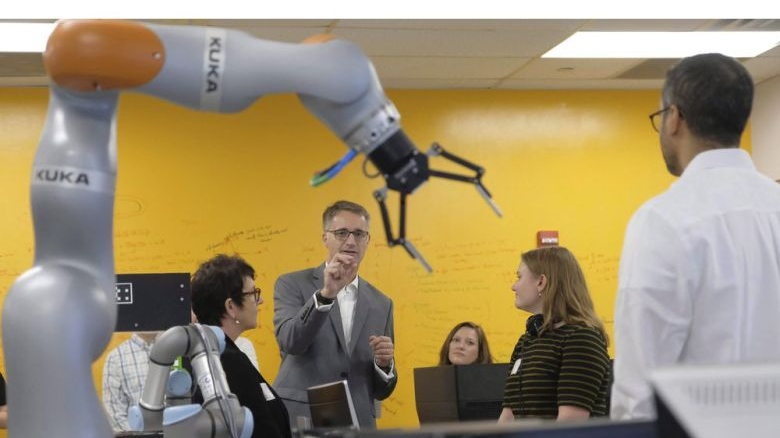 TORONTO -- Ontario has axed $24 million in artificial intelligence funding to two research institutes, amid other recent cuts to the science and tech sectors.

The Vector Institute for Artificial Intelligence was due to receive $30 million under an agreement with the previous government, but got $10 million last year from the current Progressive Conservatives. No further money is budgeted for it in the province's expenditure estimates for this year.

There will also be $4 million less flowing to the Canadian Institute for Advanced Research, which was tapped by the federal government to lead a Pan-Canadian Artificial Intelligence Strategy.

Premier Doug Ford, who spoke Tuesday afternoon to the Collision technology conference in Toronto, said his government is a big supporter of the tech sector.

"When I went up to Ottawa and looked at their tech centre up there, they're over the moon with our government right now," he said after making an unrelated announcement in Ajax, Ont.

"They're as happy as punch ... Up in Kitchener-Waterloo, I met with 14 companies up there. True entrepreneurs. They're all excited. You talk to any business owner no matter how small or large they are, they're saying, 'Thank god you guys got elected."'

The Tories are trying to eliminate an $11.7-billion deficit, and have cut funding in a variety of areas, from public health to a tree planting program to Legal Aid Ontario.

They've also cut nearly $52 million for health policy and research, which involves a large reduction to the Health System Research Fund that contributes to research relevant to provincial policy.

The government has further cut $5 million in planned annual funding -- starting next year -- to a stem cell research institute. The Ontario Institute for Regenerative Medicine recently announced its 2019-20 funding for research projects, including for new cell treatments for lung injuries in babies, generation of heart pacemaker cells from stem cells, and stimulating muscle repair for a severe type of muscular dystrophy.

A spokeswoman for the economic development minister said the government's understanding is that the institute "will continue to do great work for the sector with private industry funding."

"We have to find small efficiencies across the board," Ford said Tuesday. "It's not sustainable."

When the Vector Institute was launched in 2017, the Liberal government at the time said the province's investment would help encourage research and development and create jobs. Later that year it introduced a $30 million program for developing the work force, funding master's degree scholarships and creating new AI master's programs.

The Tories cut that to $10 million. A spokeswoman said the lack of further funds for the institute this year doesn't mean there won't be any further money for it in the future.

The amount is a small part of the Vector Institute's overall funding of $135 million over five years from the federal and provincial governments and more than 30 private companies.

The head of the Vector Institute said the organization has a "strong and productive" working relationship with the province.

"Ontario is unequivocally a top destination in the world for the best talent and companies pursuing AI and the Vector Institute will continue to work with the province to help maintain Ontario's leadership position," president and CEO Garth Gibson said in a statement.

"Instead of preparing our province for the economy of the future, Ford and his Conservatives are dragging Ontario backwards by ripping away resources that support innovation and job creation," Catherine Fife said in a statement.