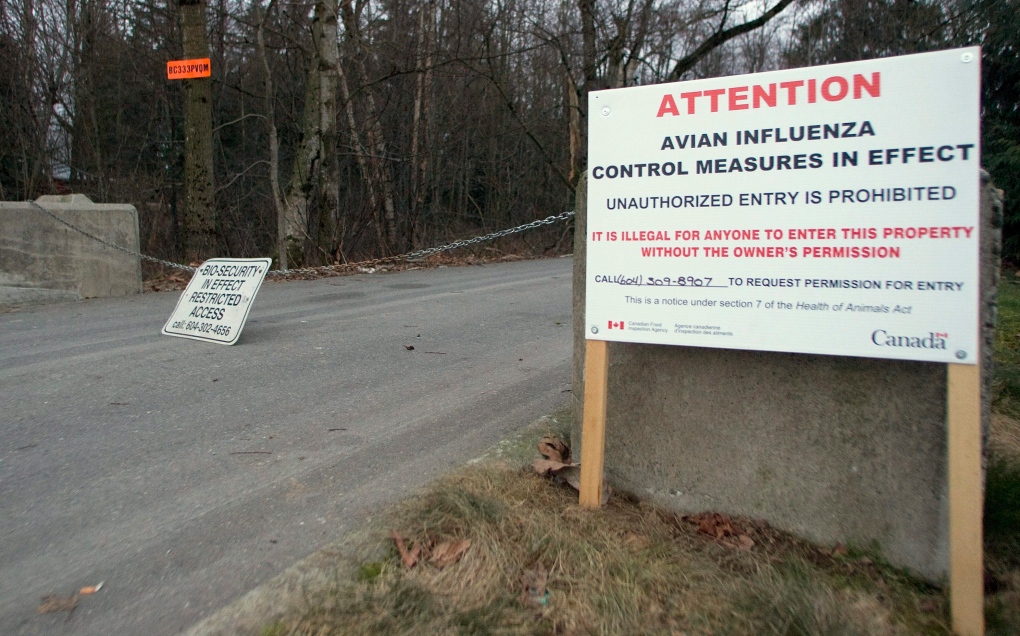 A bio hazard control sign sits outside a poultry farm in Abbotsford, B.C. after a turkey farm in the area tested positive for the H5 avian flu virus, Saturday, January 24, 2009. (THE CANADIAN PRESS/Richard Lam)

TORONTO -- A bird flu outbreak on an Ontario turkey farm is caused by the same virus that has triggered outbreaks in British Columbia and nine U.S. states since late last year, the Canadian Food Inspection Agency announced Wednesday.

The culprit is a highly pathogenic H5N2 virus, said CFIA vice-president Paul Mayers, who noted Canada would inform the World Organization for Animal Health, known as the OIE, about the finding.

Under international regulations, countries must notify the OIE when they have outbreaks of highly pathogenic bird flu viruses because these viruses can devastate poultry operations. OIE rules also allow countries to ban poultry imports from affected countries.

Japan, Taiwan, Hong Kong and Uruguay have already imposed trade sanctions as a result of the Ontario outbreak and Mayers said more may follow.

Ten countries still have in place bans on poultry from Canada because of the British Columbia outbreak, which began in December. Mayers said quarantines have been lifted on all the farms that were affected in that outbreak in the Fraser Valley. But while it appears to be over, Canada had not yet been declared bird-flu free -- and now won't be until the Ontario outbreak is extinguished.

The outbreak is on an unidentified turkey farm near Woodstock, Ont. Updated numbers for that operation released by CFIA indicate that more than 10,000 birds have died so far. The remaining 34,000 turkeys will be humanely euthanized in an effort to arrest spread of the virus, Mayers said.

CFIA has quarantined that farm and eight others which are close by or are deemed at high risk of spread because of contact between the operations. But to date the virus has only been detected on the one farm.

The arrival of a virus containing the Asian H5 gene -- first spotted in December -- was a surprise. Years of wild bird surveillance suggested there was no mingling of flu viruses between the Eurasian bird flyways and those of the Americas.

"This kind of intercontinental transmission of highly pathogenic viruses, this is unprecedented."

This H5N2 virus has not yet been seen to have infected people. H5N1 viruses have; the World Health Organization says 784 people in 16 countries are known to have been infected since 2003 and 429 of them have died.

But all H5N1 viruses are not identical. They are a family of viruses. And the branch this particular H5 belongs to has not often infected people in Asia, Donis said.

However, the virus appears to be well adapted to wild birds. Donis said the virus's spread across North America has traversed the wild bird flyways. First seen in the Pacific flyway -- British Columbia, Oregon, Washington and Idaho -- it then moved into the Central and Mississippi flyways. Ontario is in the Mississippi flyway.

The virus has not yet been spotted in the Atlantic flyway.