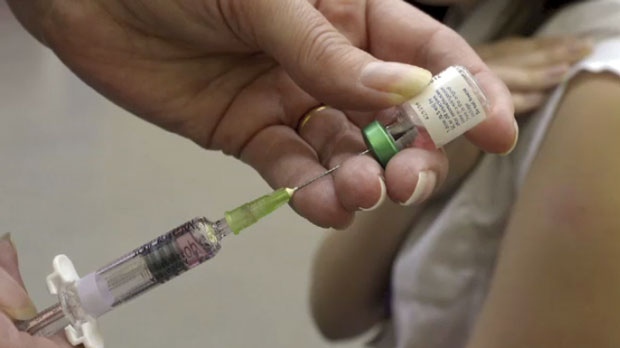 TORONTO -- Doctors in Ontario are warning that misinformation being spread online is undermining public trust in vaccines.

The Ontario Medical Association, which represents about 31,500 doctors in the province, has launched a public awareness campaign through Twitter, Facebook and traditional media in a bid to combat myths around vaccines.

The group's president, Dr. Nadia Alam, said increasingly doctors are hearing from patients who say they are afraid to get a vaccine or have their children immunized because of information they've encountered online.

"They're more worried about the vaccines than the illnesses themselves," she said. "They don't realize that the risks of the illnesses are actually much, much greater."

The province's doctors are joining the growing ranks of health and government officials who are warning of the consequences of not receiving routine immunizations.

"A lot of the illnesses we immunize against, a single case can quickly become an outbreak," Alam said. "Right now, there are measles outbreaks in British Columbia, the U.S., in France, in Ukraine...thousands have been infected and hundreds have died."

Alam also pointed to cases in Ontario, including an incident in late March in which the public may have been exposed to a person with measles at the Vaughan Mills shopping mall in Vaughan, Ont. Public health officials in Toronto are investigating a lab-confirmed case of measles in an adult who acquired the disease in another country.

It's the second time this month the agency has issued a public warning about a measles case. On March 5, the city's associate medical officer of health said an unvaccinated infant under 12 months of age had been exposed to the virus during a trip abroad.

Alam said one of the most damaging myths online about vaccines is a debunked study which linked the measles immunization to increased rates of autism in children.

"Unfortunately, that mistruth caught on like wildfire," she said. "It has persisted even though there have been a number of studies since then that have proven that there is absolutely no link between the measles vaccine and autism."

Vaccination Choice Canada, a group that urges people to get educated about the risks of immunizations, launched an ad campaign across Toronto in February, with four messages set to rotate over more than 50 digital billboards for two weeks. The ads, which were eventually taken down, included messages such as "educate before you vaccinate," "what are the risks?" and "how many is too many?"

Health Minister Christine Elliot called the ad campaign "very concerning," saying the government would continue to urge people to be vaccinated against a variety of conditions.

In January, Canada's chief public health officer urged her fellow doctors to answer questions from concerned parents about vaccinating their children to head off the spread of measles.

Dr. Theresa Tam said that some parents have come to fear the prevention of measles more than the disease itself, citing seeds of doubt planted by "misleading, or worse, entirely false information" online.

Alam echoed Tam's request and asked people to talk to their family doctor if they have concerns about immunization.

"Talk to your doctor, get your concerns out and get the facts," Alam said. "Then make one of the most important decisions you'll ever make for your child."