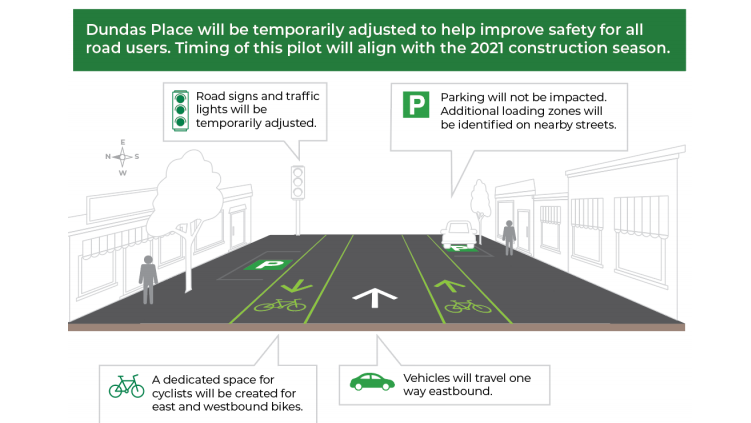 The concept for converting Dundas Place into a one-way street with bike lanes. (City of London)

LONDON, ONT. -- It may be back to the drawing board for a widely panned proposal to make Dundas Place safer for cyclists.

A week ago city engineers unveiled their proposal to add cycling lanes to four blocks of the Dundas Street Flex Street, and limit traffic to eastbound vehicles.

The pilot project would be evaluated following this year’s construction season.

“We have received lots of communication about ideas and concerns, everything from loading zones, to parking concerns, to cyclist safety,” explained Councillor Elizabeth Peloza who chairs CWC.

Cyclists have criticized the design as dangerous, and businesses have questioned the impact on deliveries and parking.

The intent of the redesign is to provide an east-west cycling route when construction of the Bus Rapid Transit System requires removal of the protected bike lane on King Street.

The committee stressed a need to consult with stakeholders prior to bringing forward additional options.

A new proposal for Dundas Place will go to the Civic Works Committee on March 30th.