Over the past two days, hundreds of bird enthusiasts have flocked to a lagoon in Thedford, Ont. to catch a glimpse of a bird never before seen in Canada.

"I’m here for the marsh sandpiper,” says Sue Deadman, who travelled nearly 400 kilometres from Orillia, Ont. to see it.

A few metres away was Brian Morin, a bird enthusiast left his home in Cornwall, Ont. at 2 a.m. to get there. But the 700 kilometre trip was worth the wait.

“This is the first record for Canada,” says Morin.

“It's a shorebird which may not look that much different from the other birds that are around, but when you get something like this, it's a one of a kind. Most people have never seen this unless you've travelled the world,” Morin adds. 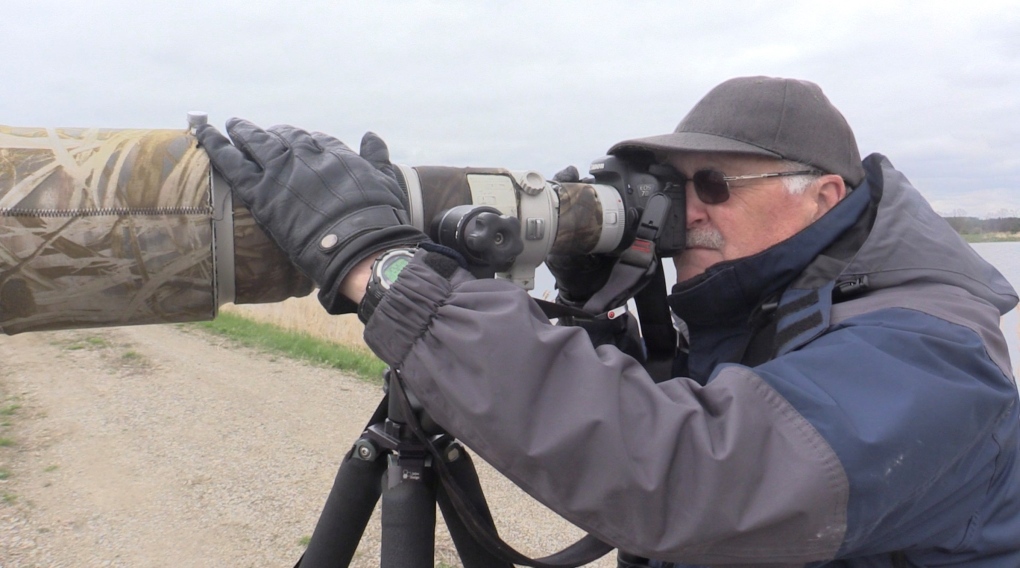 Brian Morin drove nearly 700 km from Cornwall, Ont. to Thedford, Ont. to catch a glimpse of the marsh sandpiper. It’s the first time the bird has been recorded in Canada. (Brent Lale / CTV News)

Local birder James Holdsworth was the first to spot the sandpiper from the road near the lagoons. He often stops in that spot, and couldn’t believe his eyes Saturday.

“It’s mind blowing rarity,” says Holdsworth. “I couldn't have picked anything rare if I tried terms of like a fantasy board.”

He says he knew right away it was something special as it looked similar to other yellowlegs in the area, but could tell by the pale colour in the head and neck that it was a sandpiper.

“When it flies it has a big V of white up the back which is very distinctive, and it's got long green legs, unlike anything in North America,” says Holdsworth. 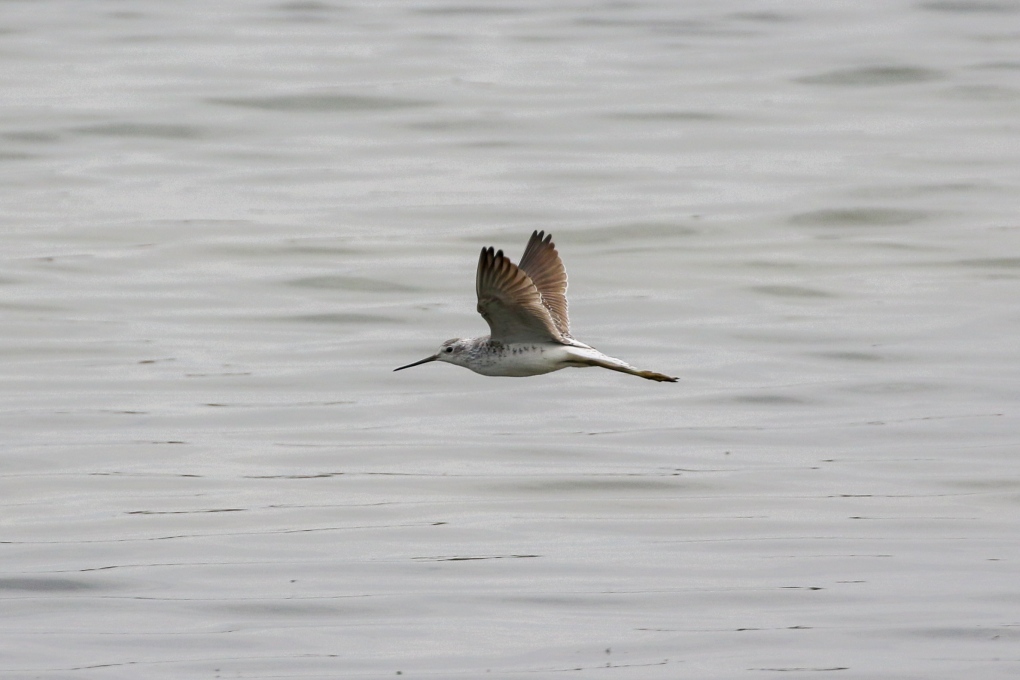 The marsh sandpiper differs from lesser yellowlegs in that it has a very pale head and neck, long thin bill, long green legs and white wedge up the back. (Source: Matt Parsons)“When I saw that, my heart was beating, hands shaking, and just disbelief that this was actually here. This Asiatic bird barely shows up on the west coast of North America and in Alaska occasionally, but it's even a rare bird on the Atlantic coast on the British side. It’s native to Central Asia,” he adds.

When word got out that Holdsworth had spotted the marsh sandpiper, bird watchers wanted their own sightings. Ontario Field Ornithologists (OFO) President Jeff Skevington immediately contacted Lambton Shores Mayor Bill Weber and arranged access to the Thedford Lagoons, which is private property owned by the municipality.

After they were given approval, more than 500 people have shown up on Sunday and Monday. 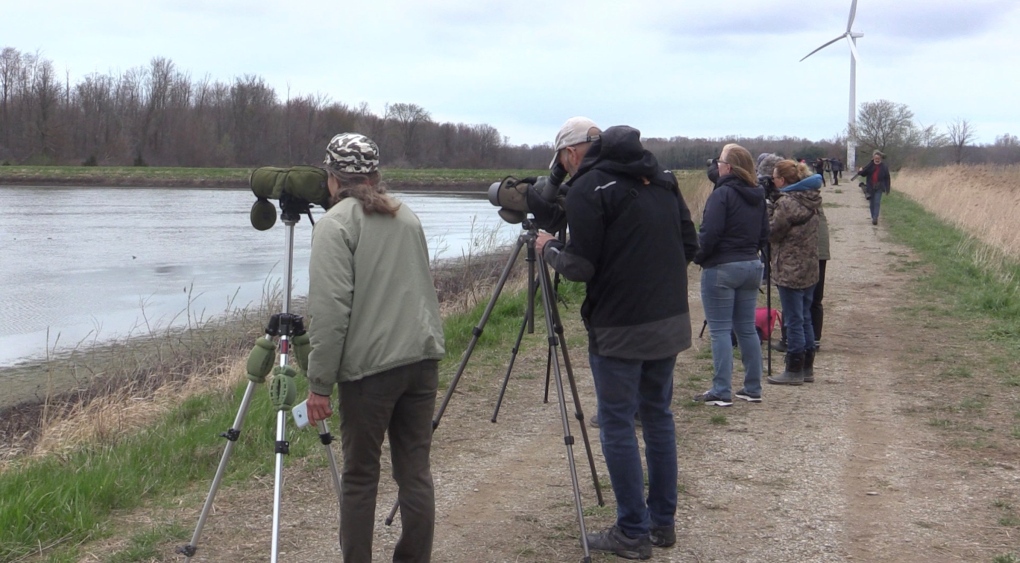 Hundreds of bird enthusiasts from across the province and Michigan have been flocking to Thedford, Ont. over the past two days to catch a glimpse of the marsh sandpiper. It’s the first time the bird has been recorded in Canada. (Brent Lale / CTV News)“The OFO just launched the Ontario rare bird ambassador program,” says Susan Nagy, an OFO board director.

“It's for situations exactly like this where a rare bird comes to a private property or areas where we don't have access, and we work together with the landowners or with the municipalities to try and gain access. It’s to keep everything organized and safe for the birds and the people. This is the first one, and you couldn't get a better bird to start the program,” Nagy says.

Most of the birders could not get a good shot with their camera, as the sandpiper was located across the lagoon. But Bryan Puttock from Burlington and others were using a scope to observe.

“He's just he's a beautiful little bird," says Puttock. “I've seen him once before in Australia, so that's his normal habitat way over the other side of the world. So for him to come here, is amazing to think how he got here”.

Holdsworth, who was back again Monday for another brief look, has become a bit of a celebrity in the bird watching community this weekend. 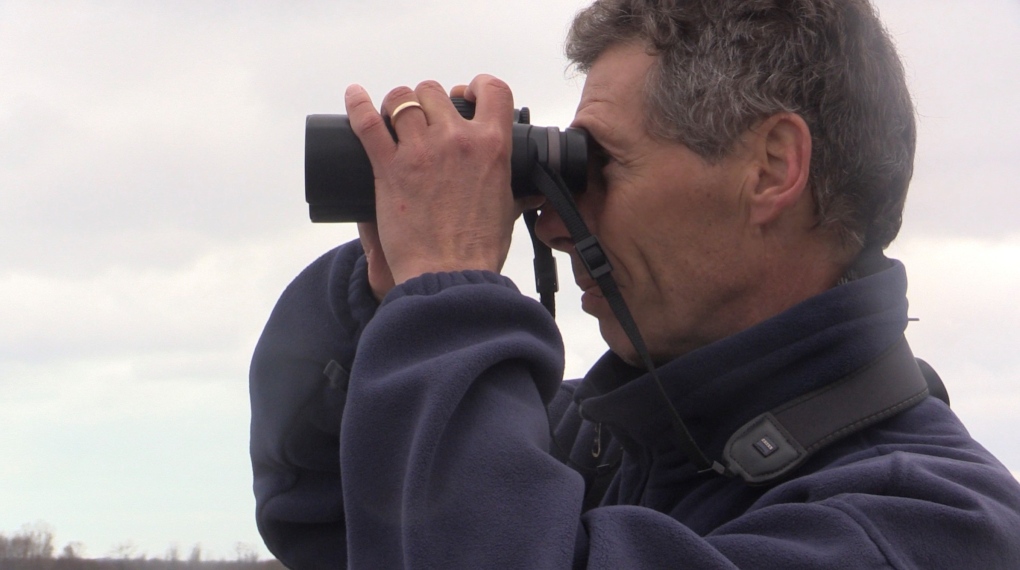 James Holdsworth discovered a marsh sandpiper in Thedford, Ont. Holdsworth says it’s the first recorded sighting of the bird in Canada. (Brent Lale / CTV News)Even two days after his first sighting, he’s still in shock that the marsh sandpiper has landed five minutes from his home.

“It’s a dream come true, and I don't think you could pick anything crazier,” says Holdsworth. “Birders always fantasize about what they want to see, and they look in European field guides or Asian field guides and think that would be a great thing to see. This is one of those birds where it'd be like hitting the Powerball lottery.”

For most of these birders, just like a lottery win, this is once in a lifetime.

Three men who disappeared after planning to rap at a Detroit party were killed by multiple gunshots, police said Tuesday, five days after their bodies were found in a vacant, rat-infested building.

A report from British Columbia's coroner says a prominent anti-vaccine and COVID critic died in 2021 of a drug overdose, although he also tested positive for the illness post-mortem.