At Mapletwiss Farm near Arthur, Ont. they have a multitude of discarded old jack-o'-lanterns that are finding their final use -- as feed for their livestock.

“I think we did get a lot. We didn’t really count, but I think we probably had 200 people here on Saturday,” says Amanda Twiss.

Mapletwiss Farm hosted a “pumpkin party” over the weekend, inviting people out to their farm to unload their used jack-o'-lanterns. The response was overwhelming, and the Twiss’s pigs, chickens, even cattle, are now reaping the rewards.

“The pumpkins are good for them. It is part of their natural diet, and they get to forage, and do their natural behaviours while their eating the pumpkins, and breaking them apart themselves,” says Twiss.

Just northwest of Stratford, Perth Pork Products has their annual pumpkin cart out front, encouraging anyone who wants to “recycle” their pumpkins, to recycle it into the mouths of their heritage breed pigs and wild boar. 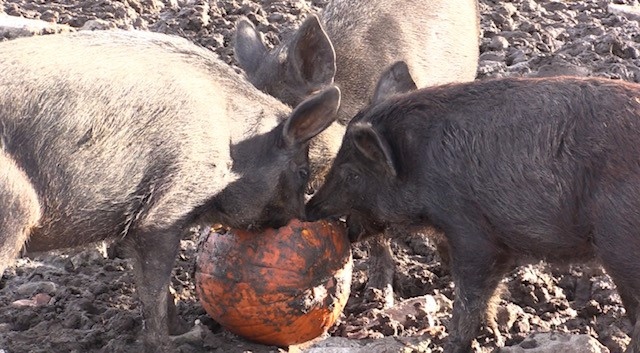 A few years ago, they had over 800 pumpkins dropped off at their farm.

“If it’s nice and cold, and we’ve got a nice snow cover, and it freezes at night, the pumpkins will last six to seven weeks, and we’ll feed them some everyday,” says Perth Pork Products Owner Fred de Martines.

And what the animals don’t devour, will ultimately find its way back to the field, in one way or another.

“The pigs will eat them, and anything they don’t eat will just go back into the soil as nutrients. I mean the pigs are eating them really well, and then in turn they’re creating food for us, so they’re absolutely not going to waste, getting a second use with the pigs here,” says Twiss.

It's “much better than the landfill,” adds de Martines, who is a certified swine specialist. “Eventually they turn it into manure, we spread it out on the fields, and grow our crops. So, it’s your full cycle,” he says.

A hand surgeon testified Monday that Johnny Depp could not have lost the tip of his middle finger the way he told jurors it happened in his civil lawsuit against ex-wife Amber Heard.

The Canadian royal visit took place at a time when many are starting to view Prince Charles differently, given that his destiny to be King seems to loom closer, Richard Berthelsen writes in his exclusive column for CTVNews.ca.