A provincial fire marshal is in London investigating a suspicious explosion at a strip mall in the southeast end of the city.

Emergency crews were called to 920 Commissioners Rd. E. around 1 a.m. Sunday for a blast at Universal Kuts, but a neighbouring tanning salon was also damaged.

Investigators with the OFM and London police could be seen going through the building Monday morning.

"It is serious when you do blow out windows in the neighbouring building," says Kirk Loveland, a platoon chief with the London Fire Department.

Glass was on the ground steps away and through the open door melted barber chairs could be seen and other debris was scattered. Next door, an alarm could was sounding more than 12 hours after the initial 911 call came in. 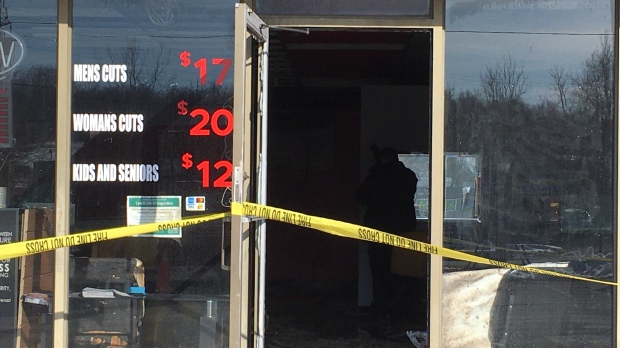 "Crews responded to reported structure fire, where people did see flames coming out of the building," added Loveland.

"Upon arrival, most of the fire was out, but they did enter and extinguished what small fire was left inside."

On Sunday morning, a few of the affected business owners arrived. The owner of Universal Kuts Shehab Kawach was hesitant to talk, telling CTV News that police instructed him not to speak. He was not allowed to enter his business.

An insurance broker whose location is above the barbershop said he wasn't allowed to go in either, and was disappointed that he was kept in the dark about the details surrounding the fire.

The investigation is now primarily in the hands of London police.

Due to high dollar amount of damage and the initial report of an explosion, the OFM has been called in. He'll likely be working into Monday.

Fire crews on scene of suspicious fire/ explosion at strip mall. Fire out and contained to unit of origin. Some damage to unit to west. Primary and secondary searches complete. FPO en-route. No injuries at this time. ⁦@MLPS911⁩ & ⁦@lpsmediaoffice⁩ on scene. #ldnont pic.twitter.com/7ISKbuMQD6