LONDON, ONT. -- Images of troubling and vile graffiti spray painted on signs at several locations in Norfolk County is concerning to the Nature Conservancy of Canada says spokesperson Andrew Holland.

“It’s unfortunate that we’ve had a rash of incidents where people have spray painted stuff on signs, or they’ve been damaging or stealing property,” said Holland.

The group is a national not for profit that conserves land that is sold to them or donated and in some cases creates walking and hiking trails.

The damage according to Holland is occurring right across southwestern Ontario.

“Not only is it a problem to have to go and raise the money to replace the infrastructure that’s being stolen or broken or vandalized, but it’s sort of disheartening for volunteers too who are very supportive at the local level,” Holland said.

One of those groups is the Turkey Point Mountain Bike Club that maintains more than 90 kilometres of trails with way finding maps spread out so riders can navigate.

“We are ready to update our maps. They are $150 each and we have to replace 20 of them. And until we get this problem solved we’re just a little bit hesitant of proceeding with that,” says club president Rob Luke. 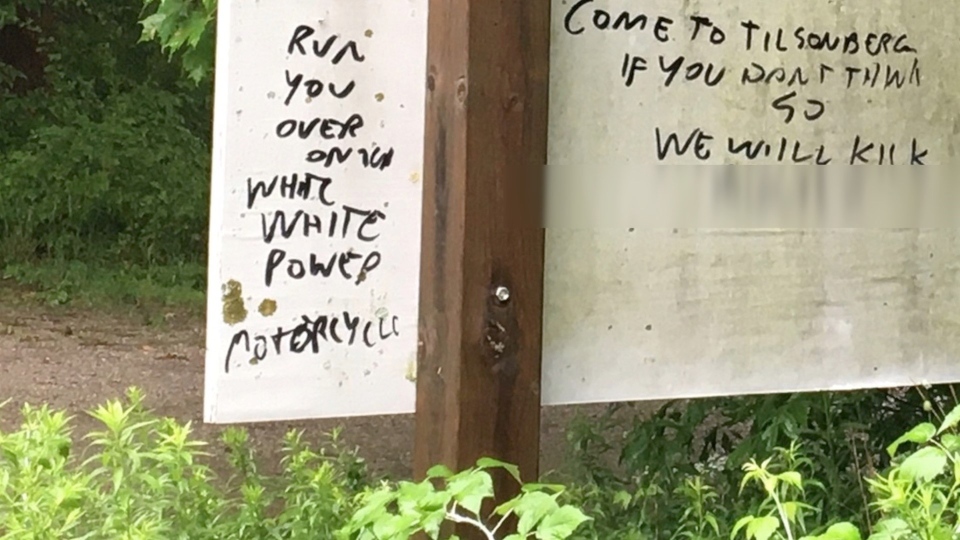 The Graffiti is a kick to the gut for all the members of his club.

“People come to Turkey Point to ride Mountain bikes from all over the province. And they come here and they see that kind of garbage is quite disheartening.”

According to Holland, Graffiti isn’t the only problem as littering, illegal dumping, and even fires are being set.

“We encourage people to come out, but leave no trace. Come out and enjoy these areas but please clean up after yourselves.”

Holland encourages anyone who witnesses someone defacing or damaging the infrastructure or woods to report it to them or crime stoppers, so the area can be enjoyed for future visitors.