LONDON, ONT. -- The Old East Village (OEV) is undergoing a major facelift as the reconstruction of Dundas Street gets underway, but some Londoners experiencing homelessness say the construction project hasn’t considered their safety.

On Tuesday evening, empty sidewalks and an unusual silence greeted visitors to the core business district.

“We are people too,” says a young woman named Shaneesa.

Shaneesa and two friends were in a nearby park, feeling pushed off Dundas.

“They just look at us like we’re nobodies. I think they should have given us a heads up or something,” she adds.

On Monday, road and sewer reconstruction began between Adelaide St. and English St., including fencing extending the length of both sidewalks.

The construction fence narrows each sidewalk.

Despite periodic interruptions in the fence where people can cross Dundas, several people experiencing homelessness told CTV News that it makes the sidewalk feel enclosed and potentially dangerous in the evenings when few people are around.

“I’m a streetworker, and having this blocked off is actually very fearful for me if someone approached me in an aggressive manner,” explains Shaneesa. 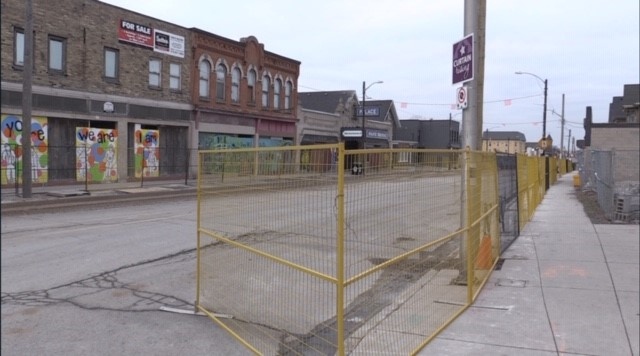 City hall says there are police foot-patrols in the area and security guards on the construction site.

The municipality’s Homeless Prevention and Housing team believes the deserted streets is likely the result of the winter shelter program and transitional housing being offered in hotel rooms.

Shaneesa still hopes city hall can help those feeling displaced by the construction.

“It’s nice that they started the warming spaces, but those don’t stay open all night. It would just be nice to have something else.”

The two blocks of Dundas Street through Old East Village will remain under construction until this fall.