LONDON, ONT. -- It has almost been a year since New York City filmmaker JJ Sereday captured the silence of London in the six-minute film ‘Alone Together.'

Shot at the height of the first lockdown in March and April 2020, Alone Together featured the Forest City's empty streets mixed with music, voice and images of the community still finding ways to come together to support front-line workers.

It was first released on YouTube and currently has 140,000 views.

Now Sereday has released a trailer for a follow-up film.

‘Alive Together’ has a similar title, but a different perspective.

Sereday, a U.S. citizen, filmed 'Alive Together' over a three-month visit to London last summer and fall, and a second extended stay from this February until just a few days ago.

Each time Sereday arrived in London he says he followed all isolation requirements before venturing out.

Viewers will recall Sereday has been visiting the Forest City since before the pandemic.

Once it hit, he says his partner Joanna, a nurse at London Health Sciences Centre, inspired him to create the first film.

“For the past three years London been my second home. It’s starting to feel like my main home now, with New York being a place I go back for work.” 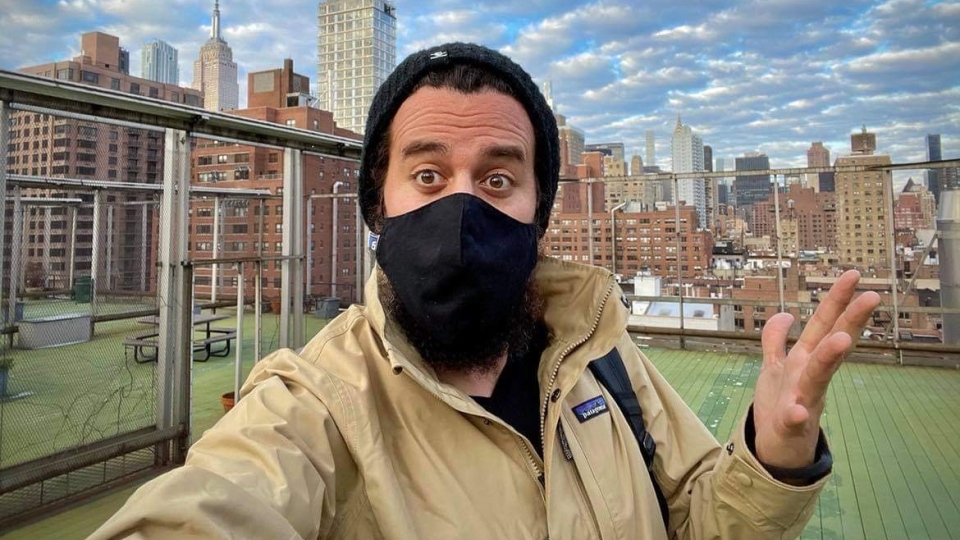 Filmmaker JJ Sereday is seen on the roof of his New York building.

With the Empire State Building over his shoulder on the rooftop of his Manhattan apartment, Sereday told CTV News over Zoom his growing love for London made it easy to decide to proceed with Alive Together.

He admits he had planned to make a film in his hometown, which would have generated far more views.

“I did film more of New York when I got back. And I do have a ton of footage that I am sitting on, and I’ve never released anything. But there’s something special about London, so it just felt so good to capture that.”

In the nearly two-minute trailer for the new film, Sereday says it is clear the tone has changed from the concern of the first film to the hope.

“We can do a sequel called 'Alive Together,' that coming back to life. That human response and resounding, like it gives me the chills.”

But while the film, which has received some funding from municipal and private groups, shows life coming back to London, we all know recent realities have put the city back to nearly the appearance of the first film.

It is why Sereday is holding the release of Alive Together with the hope the trailer provides optimism as we face the final big hurdle of the pandemic.

“We are going to get through, it’s going to be tough, we’re not going to like this.”

But in the end, Sereday’s film reminds us we will be ‘Alive Together” once again, as restrictions finally ease. Watch the trailer here.