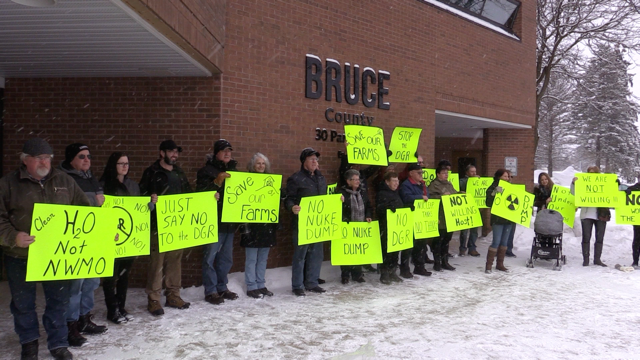 They’re protesting plans to bury Canada’s used nuclear fuel under 1300 acres of farmland north of Teeswater. South Bruce is one of two communities in Canada left in the running to host the country’s high level nuclear waste.

A 1300 acre site just north of Teeswater has been identified as a potential underground site for the multi-billion dollar project, that would house approximately 5.2 million used fuel bundles, that remain dangerously radioactive for hundreds of thousands of years.

The Nuclear Waste Management Organization says they’ll pick one site between South Bruce and Ignace, in Northern Ontario, by 2023.

Michelle Stein lives near the proposed site in South Bruce. She organized today's protest.  "Burying your problems to get them out of site is never the answer. I don't want this underground mess to be the heritage that I leave for my children and grandchildren."

Saugeen Shores Mayor Luke Charbonneau is the one bringing forward today's motion to support DGR's to store nuclear waste. "There's an international scientific consensus that the best way to store waste materials from nuclear power production is through passive isolation in a Deep Geological Repository."

The protest comes as Bruce County council debates a motion to reinforce its support for a permanent solution to the country’s nuclear waste, specifically the Deep Geological Repository model that encases the waste in copper containers, encased in clay “buffer boxes”.