"There is trouble in Ontario's garden," says Frank Schonberger, the organizer of the rally.

They are also asking for the government's help to supersede the orders.

"Why do rules in Norfolk County have to be so much different and stringent than any of the provincial and federal rules that any other health units are abiding by," says John Cooper with Strawberry Time Farms in Simcoe.

The health unit and farmers in the county have been in a year-long battle over quarantine rules for temporary foreign workers (TFW).

A year ago, Dr. Nesathurai put an order in place requiring TFW's to quarantine for two weeks upon arrival, and ordered a maximum of three workers per bunkhouse despite the building square footage.

The other workers have to quarantine in hotel rooms paid for by the farmers. 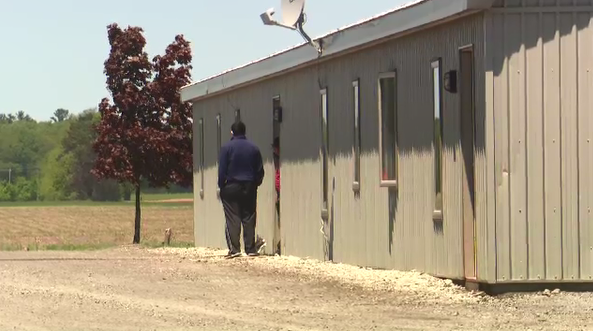 In 2021, should a worker test positive, every worker is required to isolate one to a bunkhouse.

"Our job is not to be popular or win endorsement of people," says Nesathurai.

"We are required to act in best public health interest".

On March 14, Nesathurai added another restriction regarding workers transportation from Pearson International Airport in Toronto, Ont.

The new order says farmers can only pick up their workers in cohorts instead a large group on a bus.

This means a maximum of three workers per vehicle and could require farmers to make multiple trips to Toronto to get their staff.

"Our farm has 18 workers arriving on April 1," says Schonberger.

"That is going to require me to make five trips to the airport to get them to the farm. Workers from Oxford County, Elgin and Brant Counties can all come on same bus to their farms".

Mary Shabatura of Shabatura Farms near Waterford, Ont. had 24 workers arriving at the airport today.

"We feel we can bring our guys safely from airport on the bus, space them apart and follow same protocols they do for school children and everyone else," says Shabatura.

Nesathurai says the health unit is working in the best interest of the entire county.

He says there approximately 4,000 seasonal agricultural workers in Haldimand & Norfolk counties every year.

Last year at Scotlynn Farms in Vittoria, Ont. an outbreak affected 200 migrant workers and an additional 20 people off the farm.

"Already this year, 22 farms have been affected due to COVID-19 exposures associated with workers traveling on buses from Toronto Pearson International Airport,"says Nesathurai.

Citing a small health unit of 100 people, Nesathurai says an outbreak could have major effects on the county.

Those include taking staff away from the vaccination program to deal with the outbreak, and also could push the county into further COVID-19 restrictions from the province.

He wrote to Prime Minister Justin Trudeau asking for help.

One of the major requests was asking for TFW's to be vaccinated upon arrival to the country. Or send vaccine to his health unit to vaccinate the workers themselves.

"We've asked for help from federal government and we have not received it, so we are doing what we can to keep people safe," says Nesathurai. 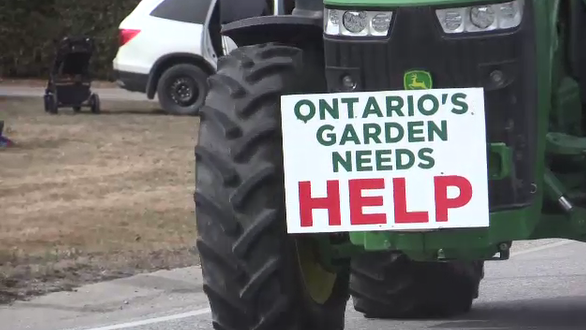 "None of the orders since the start of the pandemic have been in consultation with members of board of health or myself, " says Chopp.

"They are exclusively Dr. Nesathurai's orders, and it’s frustrating when decisions that affect an entire community are made within a silo with no consolation and no ability from us to weigh in on those decisions. At the end of the day it’s the politicians who are accountable to the public, and yet the politicians have had no say as to how this has unfolded here in Norfolk".

The Ontario Federation of Agriculture (OFA) says the rally Tuesday received big support from the public.

"We need these farmers to be in the field harvesting as early as May," says Larry Davis, a director with the OFA who represents Norfolk County.

"There are crops in the ground now particularly asparagus and that needs to be harvested soon."

The farmers drove their tractors from outside of Simcoe to the Norfolk Fairgrounds where organizers spoke to the fellow farmers. They hope this rally catches the attention of Premier Doug Ford.

"These rules are a nightmare for farmers," says Schonberger.

"A small family farm cannot do this, we need government help".