No injuries in Strathroy train derailment but track damaged

Commuters in Strathroy woke up to a traffic headache after a train derailment left most rail crossings closed in the heart of the town.

Thirteen cars from a freight train heading west jumped the tracks around 4:20 a.m. leaving a large mess for emergency crews and CN crews to examine.

Fire crews were able to quickly establish that nothing hazardous was leaking, however one tanker was leaking a non-hazardous dye. Evacuations were not required however all rail crossings in the heart of Strathroy were shut down for a time.

"A total of 13 cars on the westbound train are involved in the derailment. There are no injuries.

One car carrying petro alkylate, an environmentally sensitive product used in the manufacturing and preparation of other products such as plastics, leaked a small amount of product. The small leak was stopped and the spilled product was contained to the track.  Environmental crews are on site cleaning it up since this morning.

The rest of the cars were a mix of empty cars and others carrying paper or agricultural products.

Clean-up of the derailed cars will continue through the day and crews are working to open affected road crossings as soon as possible.

The cause of the incident is under investigation

There is extensive damage to the cars and the track itself.

VIA Rail says its trains #84 and #87 are cancelled between Toronto and Sarnia until Friday, due to the derailment.

But on Thursday and Friday trains #84 and #87 will operate between Toronto and London.

The following trains are cancelled:

#84 scheduled at 6h10 from Sarnia to Toronto

#84 scheduled at 6h10 from Sarnia to Toronto

VIA Rail is communicating with customers who have reservations on the impacted trains. 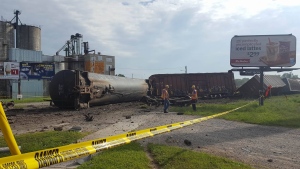