No charges in fatal OPP shooting in Exeter, Ont.: SIU 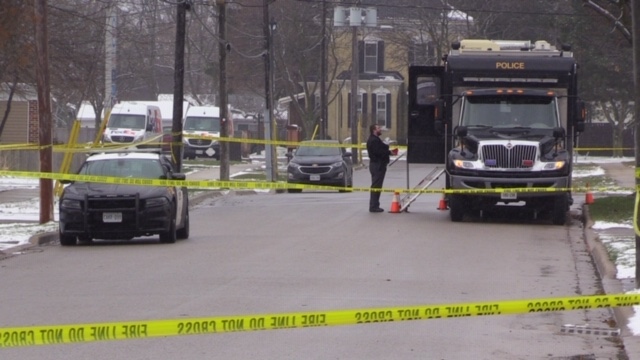 The SIU spent much of the day investigating the police involved shooting in Exeter, on December 4, 2019. (Scott Miller / CTV London)

MIDDLESEX CENTRE, ONT. -- Ontario's Special Investigations Unit has concluded there is no basis for criminal charges in the shooting death of a man in Exeter, Ont. by police.

Huron County OPP officers were called to a residence at 65 Simcoe St. in Exeter the evening of Dec. 3, 2019 to assist firefighters.

A neighbour had called 911 to report a resident at the home was having a mental health episode, that there was a fire on the stove and the house was filling with smoke, but he refused to leave.

Fire crews were trying to enter the home to deal with a kitchen fire, when 44-year-old Wade Vanderwal, who was home alone, reportedly armed himself with an axe and refused to open the door.

Officers eventually forced the door open using a battering ram, and were then approached by Vanderwal with the axe outside the home.

A stun gun was reportedly used with no effect, and then two officers reportedly fired at Vanderwal, a total of 11 times. He was treated on scene and then transported to hospital where he later died.

The director of the Special Investigations Unit, Joseph Martino, has determined there are no reasonable grounds to believe that any officer committed a criminal offence in connection with the man’s death.

In his decision he added, "...the Complainant’s death was tragic, made more so by his mental health at the time. The Complainant had struggled with mental illness for many years. On the day in question, he was very clearly in acute mental distress in the hours leading to the confrontation with the police. What he needed, more than anything, was medical attention. That, however, was not going to be possible unless immediate steps were taken to reach the Complainant, who in his altered state of mind had locked himself in his home and was refusing to come out with a small fire burning in the kitchen."