WINGHAM, ONT. -- Bonnie O’Reilly and Graham Nesbitt will be friends forever, after the Huron County hockey mom donated her kidney to the arena manager who helped launch her son's NHL career.

“No words can really express the thanks,” says an emotional Nesbitt during a Zoom call with Bonnie, who responds with, “Well, I feel it, so that’s good.”

In 2011, Nesbitt, who's from Seaforth, Ont. was diagnosed with a kidney disorder called Berger’s Disease. By 2019, it became apparent the man who used to operate Seaforth’s arena needed a kidney transplant.

“We had a number of people step up,” says Nesbitt. “People started testing and for one reason or another, they couldn’t donate, and then my lucky star showed up in Bonnie O’Reilly.”

O’Reilly is the mother of Stanley Cup Champion Ryan O’Reilly, who brought the cup back to Seaforth's arena - the one he started out in - back in 2019.

It’s the arena that Nesbitt used to open early for Ryan, his brother, and other kids to get in some before-school practice.

“He’s one of the many people in my kids' life who took the time to care about what they wanted, and lifted them up. So, I thought, wow, here’s an opportunity I can pay back to let Graham know I appreciated what he did for my kid’s life,” Bonnie says.

Nesbitt, whose father died when he was 10, says opening the arena for the O’Reilly family and others was an easy decision - one he never thought would lead to this life-altering outcome.

“My neighbours and community helped raise me, so I just hoped someday that I could help,” says an emotional Nesbitt.

After months of testing, the two were matched on Nov. 20, 2020. COVID-19 delayed the surgery at the London Health Sciences Centre's Transplant Unit until March 3, 2021. 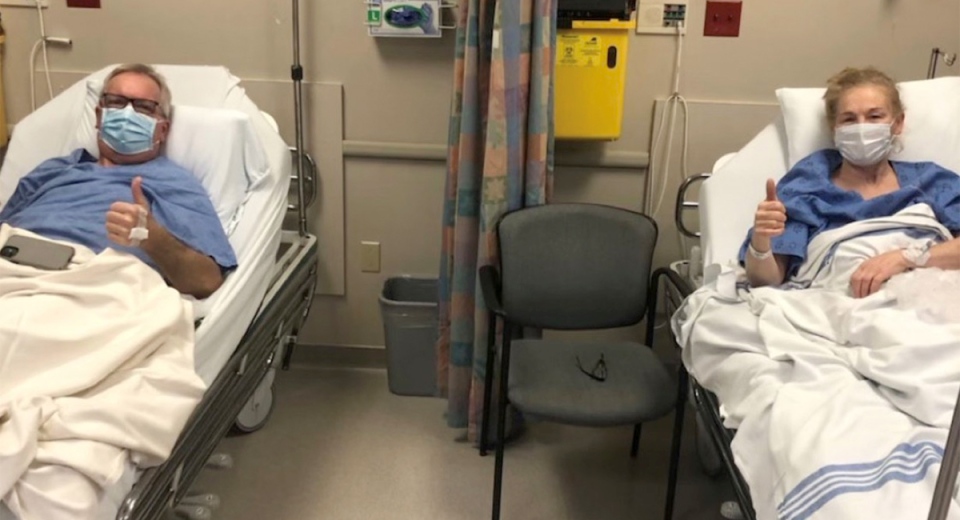 Bonnie O’Reilly and Graham Nesbitt give a thumbs up from their hospital beds in London, Ont. in March 2021.

All went well, and the two were able to share a special moment post-surgery, last Friday.

“We had a moment alone, and I felt Graham’s gratitude, and that was beautiful for me,” says an emotional Bonnie.

Her kidney donation went viral shortly after the surgery, after it was shared by the St.Louis Blues, the team Ryan O’Reilly captains. The publicity, they say, is humbling, and hopefully helpful.

You may have seen the story about how Ryan O'Reilly's mom, Bonnie, donated her kidney to the local rink manager who let Ryan in early to skate everyday.

Here's what Ryan had to say about his mom's selfless act of kindness. #InternationalWomensDay #stlblues pic.twitter.com/1dmFG79wdb

“If it plants a few seeds for other people to consider donating for someone they know or don’t know, that’s super to me,” says Bonnie.

“It’s a great way to promote the program. And the transplant team is very happy,” Nesbitt adds.

Both are recovering at their homes in Huron County and both are doing well at the moment, thankful for each other’s selflessness when their families needed it the most.

It’s even enough for Nesbitt, a lifelong Philadelphia Flyers fan, to change allegiances.

“If I’m being honest with you, I’m going shopping for a St.Louis Blues hat, as soon as possible,” Nesbitt says jokingly.