Two newly upgraded basketball courts in central London, Ont. were unveiled to the public Saturday morning in honour of the Afzaal family.

According to a press release from the City of London, the city, alongside representatives from Maple Leaf Sports & Entertainment (MLSE), the MLSE Foundational and the Toronto Raptors, two newly upgraded basketball courts in West Lions Park were unveiled on Saturday in commemoration of the Afzaal family.

“The project will provide lasting change and access to sport for London’s youth, and it demonstrates the power that sport has to bring people together,” said Mayor Ed Holder in a statement.

The project was made possible by the MLSE and MLSE Foundation, with assistance from London’s Muslim community.

Two newly upgraded basketballs courts in West Lions Park in London, Ont. were unveiled to the public on the morning of September 24, 2022 in honour of the Afzaal family. (Marek Sutherland/CTV News London)

In 2021, “in support of Our London Family and to stand up against hate,” the MLSE and City of London announced a $250,000 donation to improve a local basketball court. In consultation with the local Muslim community, the outdoor basketball courts in West Lions Park were selected by the city to receive improvements in part due to their proximity to the London Muslim Mosque, the release added.

The new upgrades include an expansion to include two full-sized courts, and improvements to the basketball nets and nearby seating. In addition, trees and community barbeques have also been added to the area.

Construction for the new upgrades took place over the summer.

“We are excited to celebrate the project’s completion together and for the community to now be back on the courts and be able to play,” Holder added.

Several youth representatives from the London Muslim community participated in the redesign, and shared ideas and suggestions with the city to improve the space.

“One of the most noticeable improvements inspired by their input is the courts’ playing surface,” the release said. “Both courts have been coloured bright purple and green to reflect the colours of Our London Family.” 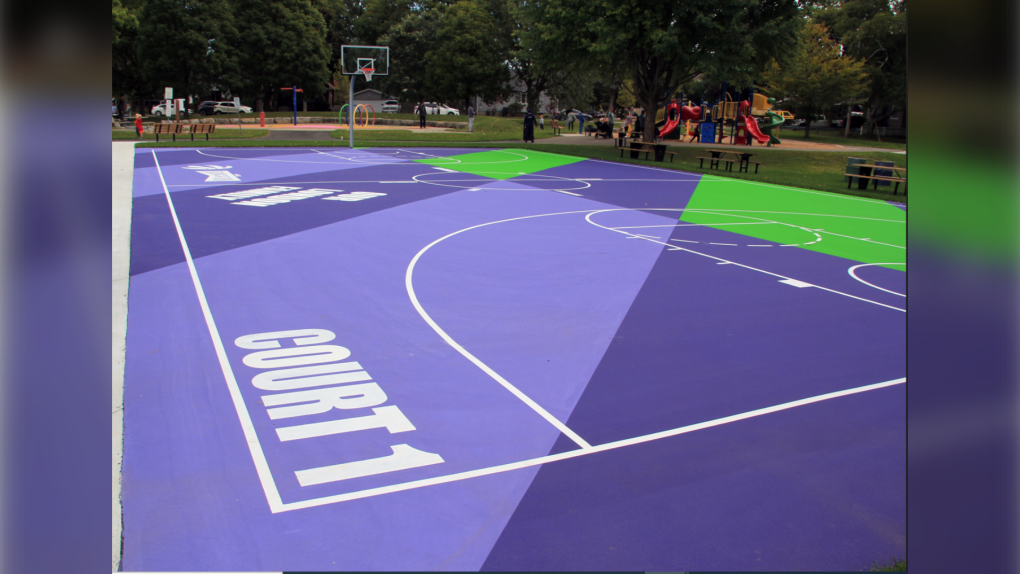 The community celebrates the reopening of the upgraded basketball courts in West Lions Park in London, Ont. on September 24, 2022. (Source: City of London)

Tanya Mruck, vice president, community engagement & social impact with MLSE said following the Raptors’ and Maple Leafs Alumni’s visit to London last year, they were inspired to work with the city to “provide lasting impact for a resilient community.”

Following Saturday’s reopening of the basketball courts, a youth basketball clinic led by sport clinicians of the Toronto Raptors organization will take place and provide youth with the opportunity to earn from experts, practice skills and be the first to play on the new courts.

“Not only will this project help improve access to sport for local youth, it also offers an opportunity to support the Muslim and greater London communities in a space that highlights culture, community and togetherness,” Mruck added.

Four members of the Afzaal family were killed in what police describe as a hate-motivated attack after the family was run down by a truck during an evening walk in June 2021.

A young boy was the lone survivor of the attack.

WNBA star Brittney Griner has been released from Russian detention in a prisoner swap for convicted Russian arms dealer Viktor Bout, according to a source familiar with the matter.

$1,048 meal: Torontonian has the most expensive Uber Eats order in Canada this year

A newly released report from Uber Eats shows that a Torontonian ordered the most expensive meal through the app in Canada this year, spending $1,048 at burger joint.

The monarchy braced for more bombshells to be lobbed over the palace gates Thursday as Netflix released the first three episodes of a series that promises to tell the 'full truth' about Prince Harry and Meghan's estrangement from the Royal Family.